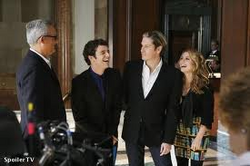 While getting ready for work at the beginning of the day, Betty is interrupted by Amanda who is ringing a bell in the bathtub. Betty is annoyed because Amanda treats her like an assistant at home. Betty has bigger concerns after she sees former Mode assistant Nick Pepper returning to tell his former colleagues about his success as Deputy Culture Editor of "The New York Review." His secret to success lay with the prestigious Young Editors Training Initiative, YETI for short. Since his departure, he has been able to catapult and become an editor.

Betty grabs an application to YETI, only to discover that she has a mere 48 hours to put together a magazine concept that reflects herself. She also must get a letter of recommendation from a sponsor, Daniel, who seems to be avoiding the task. At first she tries to present a fashion magazine mockup, and with help from Hilda, Ignacio, Justin and Christina, Betty walks into YETI as she gives her presentation about "B magazine," the lifestyle magazine for young women who to be inspired and cultivate who they already are. As Betty and supporters Hilda and Ignacio walked out, they're stunned to see Marc showing up with an entourage that included Amanda in tow. He is applying with his own fashion magazine, which he had worked on for three months, called "A-List." Both Marc and Betty understand that YETI only chooses one winner per magazine. Sensing that he has a better presentation and better sponsors who personally know the judges (Mark Badgley and James Mischka), Betty feels like her chances at making it into the program are slim.

Back at the office, Betty, after dreaming about being stuck as Daniel's assistant, gives Daniel the cold shoulder via text messaging. As he tries to apologize for his neglect, the phone rings and Betty discovers she has been chosen to enter the YETI program. Betty approaches Marc who tries to ignore her consoling. He tells Betty that the reason she was chosen because she is Latina, helping YETI meet its quota. Betty became offended by Marc's claims, but later, she tells an excited Hilda and Ignacio that YETI did chose her because of her race. Betty felt that she shouldn't take advantage of this, because she wants to be judged on her work. Hours later she stops by to tell Marc that she turned down YETI so that Marc can attend. He reluctantly accepts and apologizes to Betty; the two reconcile. Daniel gets wind of what Betty did for Marc, writes her a six-page letter, and calls YETI. He explained that earlier in the year Betty had worked with him at Player, and therefore, Marc and she were from different magazines. Once Betty returns to her desk from speaking with Marc, Daniel surprises her with a YETI internship. In the end both Betty and Marc celebrate from their desks while still working for their bosses.

Meanwhile Justin makes an unlikely friend in Randy, the bully who became his friend after they tried out for Billy Elliot: The Musical, even though Randy has started to distance himself from Justin due to peer pressure from his old friends. Hilda surprises Justin with broadway tickets to "In The Heights" for him and Randy, but at school Justin would get a reality check on true friendship when Randy embarrasses him outside of the school by telling him "Dude, stop following me around. It's pathetic. Get a life." This would cause Justin to lash out at Hilda after he came home and went to his room, but the following morning at breakfast Hilda would sit down to talk to Justin and as he opens up about what Randy did, Hilda told her son that he was perfect and that he should never change what who he is. Justin then ask his mother if she will accompany him to "In The Heights" that evening.

Wilhelmina does her best to get Connor's attention as they head off to Florida for a business meeting, which Connor accepts, resulting in Connor asking Daniel to substitute him at Molly's school to show him off to her students for a Thanksgiving day project, where it appears that Daniel and Molly seem to be hitting it off. Unfortunately, as Molly later calls Daniel that she enjoyed the time she had with him, Wilhelmina's attempts to get Connor drunk at her hotel room turns out to be a bust as Connor tells Wilhelmina that he is still devoted to Molly. As Wilhelmina returns to work she tells Marc that she will give up on snaring Connor, but judging from the way she snapped at Marc before she congratulated him on his YETI internship, this looks like its not over yet.

Retrieved from "https://uglybetty.fandom.com/wiki/When_Betty_met_YETI?oldid=10086"
Community content is available under CC-BY-SA unless otherwise noted.