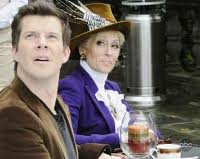 The day begins with Betty and Amanda walking towards work when she gets a call from the printer, Phil, to let her know about the upcoming issue. Later at work she asks Daniel's help, but he's about to go to a Meade Publications retreat with the other execs and Betty convinces him to let her give final approval to the latest Mode issue, that's themed "Fashion in the Eye of the Storm" in his absence.

At the printing press, Betty takes a look and gives her approval, and even takes a photo of her with the cover. But when she returns to Mode and hears about a devastating tornado in Kansas, she realizes that they can't go to print because the cover featuring a fashion tornado would trivialize the tragedy in the heartland. As Betty begs Phil to stop the issue, Phil says that he can't do it unless Daniel and Wilhelmina say so.

Betty tries to get hold of Daniel or Wilhelmina, but Claire has requested they surrender all their electronic equipment, so they can focus on creative revenue-generating schemes in an effort to see if Connor can help save the company. While Wilhelmina, who was reluctant to go to the retreat, finds herself being more attracted to Connor, especially during a hunting gun shoot, Daniel befriends a woman named Molly, who sprained an ankle falling on top of him from a tree. As they reach the retreat, Connor arrives to carry Molly...who happens to be his fiancee.

Marc is still thinking about his proposal to Cliff, and it affects Betty as she convinces him to drive her to the retreat to contact Daniel. Along the way, Betty and Amanda get caught up in Marc's fretting over his proposal and whether he should go through with it, until Amanda accidentally causes the vehicle to veer off the road.

Betty walks off and wanders into a store while Marc and Amanda tend to Cliff's station wagon, and after being hit by a boy's toy plane, she gets the idea to hire a plane to skywrite "Daniel Call Betty" in the sky over the retreat. Daniel dutifully contacts Betty and says he'll stop the shipment, but Wilhelmina convinces him otherwise, believing that the callousness of the cover would actually sell issues. The stunt works and results in their highest sales ever, but Betty is publicly blamed and labeled "Tornado Girl" after the media somehow discover she had final approval. Betty becomes a pariah and is very upset at the media attention and hate mail she receives from readers. After discovering from Marc that Daniel told Phil to ship the issue, Betty confronts Daniel. Daniel's conscience is pricked, and in a press conference, he finally takes the blame for okaying the issue and adds that he will donate all profits to the tornado victims. Molly, who saw the news conference, comes over to talk to Daniel to say she was impressed. Wilhelmina watches them and gets the idea to ask Connor to assist her with a last minute assignment.

Meanwhile, Hilda starts an underground beauty salon with help from Justin when the city turns down her permit for a legal business, mostly because she's operating the business from the Suarez home. Unfortunately, as she and Betty went down to see Archie at his office to protest over her rejection, Archie is hesitant to help her obtain one, saying that "The law is the law." This does not sit well with Ignacio, who tells Hilda that she should fight back after he witnesses his daughter's secret operations by having customers come in via code name. Later on that day Archie arrives at the Suarez household to offer her a compromise: If she earns 30 percent from any product she sells, then she can get a license to run her business as a boutique instead, so he suggests that she sells candles. Hilda takes the suggestion, and as Justin watches even asks him to stop by again if he was looking for a haircut.

Later that evening Betty quizzes Marc about Cliff and the wedding proposal. Mark then comes clean to Betty about what he did that night at the rooftop party when he slept with another man, prompting Betty to tell Marc to do the right thing. Marc later admits to Cliff he crashed the car, and tells him about the one-night stand. Cliff walks away crying, unable to forgive Marc for what he did.