The Weiner, The Bun, and The Boob 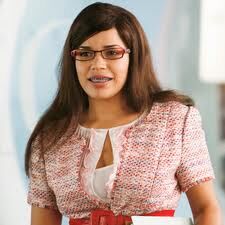 The story starts at Daniel's office, where Betty is helping him pick a new assistant. As Betty collect papers from around the office to use for submitting features, Betty walks by the reception desk where Amanda and Marc is upset that she ignores them. Betty then criticizes Marc about his shirt (too loud), then bumps into Matt, who asks about submitting new features for Mode's upcoming article called "New York's Ten Most Thankless Jobs." It appears that Matt and Betty have patched things up. However, as Matt approaches Amanda, she tries to make a move on him, but shrugs her off and Marc reminds her that he dated

When Betty learned from Claire that Daniel hired a sexy assistant named Lexie to take her place, she questioned his judgment about why Daniel hired her, given his past experiences with hiring sexy assistants pre-Betty. Daniel and Lexie seem to not be on the same page as Lexie is more concerned about herself than listening to Daniel.

At Wilhelmina's, Nico returned home from getting yogurt, only to get a warning from her mother: She will not leave her side, fearing that she will be found out as a murderer. At work, Wilhelmina also learned from Marc that Cal and Claire are having dinner and the rumor that she might be replaced by Isabella, who works for "Vogue France." As Betty walked in to ask Wili about looking for an assistant to help her, she turned to the one person who is right for Betty... Marc! This gives Wilhelmina the time needed to keep a closer eye on her daughter, whom she uses as her assistant.

The two are not happy about this, even as Marc complains about working under her while Wilhelmina tells Betty she needs to deliver a feature. They continue to bicker until Marc challenges Betty to confront Daniel about why she got the job. That's when Daniel and Wilhelmina came clean about the coin toss. Although Daniel admitted that he thought Betty the right person for the job, Betty would get teased by Marc over the coin toss, and when they get their assignment from Matt, he tells Betty that she would be the one doing the jobs, which Marc agrees. However, Marc is standing by while Betty takes the dirty jobs. When they arrive at a hot dog stand, the vendor asks the two to dress up, in which Betty is chosen as the hot dog, but Marc is picked as the bun and feels humiliated about it. This pairing is not working out and as Marc confesses about being Wilhelmina's assistant for five years and that he was better qualified as a features editor than Betty. When Marc tells her about his dream about working for Vogue only to turn it down for Mode, they run into his idol, who recognizes Marc. When he asks Marc about how life's been treating him at Mode and if he got promoted, Marc tries to be honest but Betty saves him and Marc gets an invitation to join him for a get-together.

As Marc thanked Betty for saving him, Betty gets a call that there will be an emergency meeting in seven minutes. But thanks to Marc throwing away her clothes while they were in costume, Betty blames Marc for trying to ridicule her and make her look like a joke and as a cab came by, Betty in costume got in and told Marc not to come along. Marc felt embarrassed at what he did.

During lunch, Wilhelmina and Nico run into Cal and Claire, who pitch the idea about doing a cover about vampires, but Wilhelmina thinks to herself that it's a joke. During the shoot, Wilhelmina makes her feelings known to Nico about this issue and Claire hears this. She agrees and tells Wilhelmina that it was Cal's idea, then tells her to cut ten pages from the upcoming issue. Claire's message to Wilhelmina: "Just do your job...while you still have one."

Also at lunch, Natalie pitches an idea to Daniel about joining a group called "The Community Of The Phoenix," this after being accused by Natalie for scoffing. Later that day, Daniel gets a lesson about Hiring 101 from Betty about who hired her (Bradford) and she explained the reason why she was hired in the first place, Lexie hears this and is not happy. Daniel tries to convince Lexie that he wasn't trying to seduce her, but when he touched her breast by mistake Lexie accused Daniel of harassment. Claire is not happy about what Daniel did even as he tried to assure his mother that he was just trying to explain to Lexie that he only hired her, not to bed her. Later at the center, Daniel and Natalie listen to a speech by its leader, Bennett, who tells the audience about being honest after losing a loved one, even as Daniel scoffs at the speaker. Bennett looks at Daniel and gives him advice about using honesty as way to be open. Hours later at Mode, Daniel, upset about Lexie treating him like dirt, made his feelings known about why he hired her in the first place, then tells her that she was not cut out to be an assistant and he was not a womanizer anymore. However, Daniel, using that honesty advice he got from Bennett, did tell her that she might have a future as a model, which Lexie took to heart and believed that was, indeed, her future.

At the reception desk, Amanda sees Matt and tries to kiss him, but freaks out when she kisses Betty in her hot dog costume. It turns out Amanda was daydreaming and she is still freaking out when she sees Betty in the costume for real and freaking out at Matt as well. At the meeting, Matt convinces Betty to tell Wilhelmina not to cut ten pages from the upcoming issue. So Betty pitched her story and with help from Marc (still dressed as a bun), who performed their pitch from the hot dog stand and suggested a model would be right for the feature, Wilhelmina approves it, giving Betty her first feature for Mode, with Lexie being featured for the article. Betty thanked Daniel for believing in her as a features editor and Daniel in turn thanked Betty for being honest. Hours later at a coffee shop, Betty showed Marc the article and pointed to the credit that featured his name as the contributor. She then hugged Marc.

Later that day, Wilhelmina learned that Isabella got another offer and turned down the job to replace her. When she ran this by Nico because she didn't bribe anyone at French Mode, Nico revealed to her mother about making a phone call (in French), thus saving Wilhelmina's job. Seeing how useful her daughter is, Wilhelmina tells Nico that they might be able to trust each other. But over at the marina, the blood stain the two missed while they cleaned the yacht a while back is finally discovered.

At the Suarez home, where Justin helps Ignacio with surfing the web for the first time, Hilda is starting to worry about why Archie has not come by to see her. At work Betty gets a call from Hilda about sending Archie a sexy picture by asking her about where Betty put the boots. Later on, Hilda gets a shock from Archie when she learned that she accidentally hit "Reply to All" and sent the picture (featuring her exposed breasts) to everyone in Archie's district. This made Archie furious at Hilda, as he feared this could damage his campaign. However, Archie stops by later to show Hilda a press conference he held as damage control by telling the public he still loves Hilda, despite whatever people think of what she did. All is forgiven as Archie tells Hilda the picture helped his campaign, and the two celebrate with a little lovemaking upstairs.

Retrieved from "https://uglybetty.fandom.com/wiki/The_Weiner,_The_Bun,_and_The_Boob?oldid=8598"
Community content is available under CC-BY-SA unless otherwise noted.