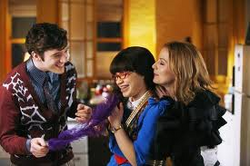 As the evening ends, just as Betty and Matt were about to kiss after Matt gives Betty a gift, it gets interrupted by Ignacio, who also interrupts a date by Hilda and Archie. At the same time Justin starts complaining about the camping trip he has to go on with Ignacio and Elena, which he finds boring.

At work the following day, Daniel and Wilhelmina tell the staff that they are hoping that an issue of

Mode devoted to sex will turn their fortunes around. But even as they discuss the article that they have to submit for the crucial issue, Betty gets quizzed by Amanda about Matt. Later that night, Matt seems a little shy about taking his romance with Betty to the next level. After they share a kiss and she indicates that maybe she will spend the night, he promptly shoves her into a cab. Betty leaves confused. At home, Hilda is dealing with the opposite: a man who is too nice to her. Betty explains why she is upset and Hilda doesn't understand it either.

Upon hearing this, Amanda decides its time to use Betty as a guinea pig as blueprint for the issue as a way to get Matt's attention, so Marc and Amanda team up to give Betty a sexy makeover and to learn the art of seduction. But no matter what she does, Matt is uninterested, as evidenced by a stop at Betty's former apartment as they were planning to see a movie, when Matt sees Betty trying to be sexy and attempting to seduce him by telling him "What's your hurry soldier?" Unfortunately Matt leaves.

The next day, Amanda and Marc lured Betty into following Matt and come upon a person whom he gives a hug, suggesting that he has another girl. But when Betty went to confront the two, Matt tells her that the woman, Helen, is his therapist. Matt is a sexaholic and uses meaningless, frequent sex as self-destructive behavior and is determined only to have sex when he's really committed and crazy about a girl. Of course, Betty's all freaked out by the idea that he has slept with hundreds of women (which has Betty hallucinating at the poetry slam that evening after she sees one hugging Matt and then sees every one of them wearing t-shirts with a number on them) and even wanted to be friends again, but Matt says that the only girl he wants in his life is Betty. In the end though, they handle it maturely and come to a meeting of minds by going up to his apartment.

Now that Archie is dating Hilda, Hilda is starting to have issues about this romance because that she's not quite feeling it for him or maybe because he's just so nice to her. During a date at a diner and just as she's about to break up with him, a woman named Felissa shows up, fawning all over him and with good reason: she used to date Archie. That incident doesn't detour Hilda by inviting Archie back to the house, but when he suspects that she was only turned on when it seemed like another woman wanted him, he leaves immediately, even though she was just kidding.

The next day, just as she was telling Betty about what happened, Felissa shows up and tells Hilda that she wants to have Archie back, leading to a confrontation that Archie walks into. In the end, Hilda says she still wants to try dating the nice guy, and after all, he has a thing for bad girls, as Archie explained to Hilda. They share another kiss, but Ignacio walks in on them.

The issue could also be about Wilhelmina's dilemma, as she starts to have trouble sleeping when she starts dreaming about Connor and starts blaming the baby for keeping her up at night. At work, Marc, after witnessing his boss zoning out at her desk, tells her that it maybe her lack of sex that is causing her to have these nightmares. To fix the two situations at once, Marc hires James, a ripped former model who loves to sing lullabies, as her "Manny". Wilhelmina is not happy about what Marc did, but agrees to keep him around. Later that night, just as Wil breaks down and demands that he remove his pants and asks him to sleep with her, he shows her that he's not interested in sex just because of his looks and hands her a bit of wisdom, which Wilhelmina takes to heart before she fires him. She needs closure with Connor in order to focus on her baby.

Finally, Daniel's issues with Molly seem to take on a message of their own, literally, when Molly invites him to a poetry slam. Daniel's intimates word to Molly has also doubled for her inspiration for her readings at the slam, this after Betty reads a text message that has Daniel getting freaked out when he realizes the poem she wants to read is a thinly veiled metaphor for their sex life, in which he's depicted crying. After being defiant and making changes to her poem, Daniel relents and lets her do the poem, which proves to be a resounding success. Later that night at his place, Daniel decided to give Molly a performance of his own by performing a song he wrote in high school that caused him untold mortification.