The Passion of Betty 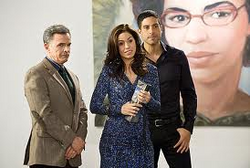 When Betty's (America Ferrera) orthodontist, Dr. Farkas, asks Betty whether is "boyfriend-free" she tells him that she is with Matt. Betty asks when her braces will come off, but Dr. Farkas, being disappointed, tells her to get another orthodontist and abruptly leaves. Betty is then seen sleeping with Matt at his apartment, when a musical sequence starts. Betty and Matt wake up, brush their teeth, head off to work and kiss their daily goodbyes. This sequence of events happens repeatedly for the next few days until Betty's head is hit by the elevator doors while Matt is attempting to kiss her. This repetition of events has Betty concerned that they are spending too much time together and she goes to talk to Justin and Hilda (Ana Ortiz) about it. Betty then asks Hilda about her pregnancy and about telling Bobby, Hilda tells her that she is not sure when she will tell Bobby. At a late photo shoot, Matt surprises Betty and tells her that he could not handle being alone during a hockey game. Betty then imagines that she and Matt are Elizabeth Taylor and Richard Burton's characters in Who's Afraid of Virginia Woolf?, which worries her.

Meanwhile, Daniel (Eric Mabius), Marc (Michael Urie) and Wilhelmina (Vanessa Williams) discuss getting rid of Denise Ludwig, Wilhelmina's replacement. At MODE, Marc is shocked to see Troy stalking him in his workplace. Troy tells him that he is his "first" and Marc is horrified that Troy wants to develop their relationship further. Daniel asks Denise to give an interview to Suzuki St. Pierre (Alec Mapa) and she agrees, but during the interview, Denise talks around the questions. During a break, Denise tells Daniel fashion is a just a waste of time and Marc records Denise's words. Suzuki later reveals Denise's secret interview with Daniel on Fashion TV and Claire (Judith Light) and Cal Hartley see it. Wilhelmina arrives and tells Claire and Cal that the best replacement for Denise is herself, Claire is angry that Daniel teamed up with Wilhelmina. Daniel and Wilhelmina then discuss having Claire join their team in order to get rid of both Denise and Cal. Wilhelmina overhearsAmanda (Becki Newton) talking about Claire's visit to South Dakota to meet her adopted son, Tyler. She then bribes Amanda into telling her about Claire's son. Meanwhile, Daniel tries to persuade Claire to join him and Wilhelmina, but she refuses. Troy tells Marc that he really loves him and kisses him much to Marc's horror. When Troy leaves, Marc tells Amanda that he has to dump him.

Betty goes to an art gallery to talk to its curator, Frances, about having Matt's paintings displayed. Frances sees Matt's paintings, but refuses to showcase them, saying that there is not enough "energy" in them. When Matt appears, Betty tells him to go to lunch, so she can continue her meeting with Frances. Frances finds some artworks good enough to showcase and Betty agrees without having seen them. Betty and Matt arrive at the art gallery, despite Matt insisting that they go home, Betty goes in with him and is shocked to see the paintings are all of her. Matt tells Betty that he painted them when they were broken up. Matt is furious that Betty publicized his personal paintings and he leaves, saying that Betty is not passionate enough for him. Meanwhile, Hilda sees Bobby exchanging money with a policeman and confronts him, during which Hilda mentions that she is pregnant. When Claire prepares to leave for the gallery, Cal stops her and asks her about their son. Cal gets angry that Claire did not tell him about Tyler.

The next morning, Betty and Hilda talk about their relationships, and when Betty brings up the subject of her not being passionate enough, Hilda admits to Betty that she read her diary and says that Betty draws her passion from what she writes down. Bobby arrives to see Hilda and they reconcile. Marc goes to split up with Troy, but Troy cuts him off and tells him his true feelings about their relationship, Marc then changes his mind. Similarly enough, Claire is about to fire Cal, but Cal cuts her off and apologizes. However, Claire still remains unconvinced and fires him. Betty later shows Matt her diary, which talks about how Matt tortured Betty. Matt apologizes and says that in order to keep the balance in their relationship, he will quit working at MODE. Claire confronts Wilhelmina about Tyler's documents, but Wilhelmina insists that she did not give them to Cal. She leaves after Claire orders her not to tell Daniel about Tyler.

Retrieved from "https://uglybetty.fandom.com/wiki/The_Passion_of_Betty?oldid=8604"
Community content is available under CC-BY-SA unless otherwise noted.