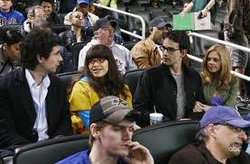 Betty starts imagining things while she was eating a hot dog, including a fantasy of Antonio Sabàto, Jr. who is interrupted by an image of Matt. Betty tells Hilda that sooner or later she is going to have to tell Matt about her kiss with Henry.

Mode's "Wedding Issue" has just been nominated for best cover issue at the MAMAs. As Daniel is congratulated by Molly on getting the nomination, Wilhelmina gets wind that Claire is getting the credit, so Wilhelmina tries to use the info she got from Victoria as blackmail, demanding that Claire tender her resignation at the event or she'll reveal Claire's dark secret to Cal and the public about Claire's secret visit to Madison, South Dakota in the early 1980s.

Daniel asks Betty to pay a visit to the features editor Penny Meadows, who seem to have her thoughts elsewhere, like complaining and wondering why all those pigeons are on her window sill. Betty then gets a text from Matt to meet her downstairs. But just as Betty is finally going to confess to Matt, they witness someone falling from the 28th floor... Penny Meadows.

Now that Penny has died, Daniel agrees that Betty should get her job and says he'll recommend it. While this is good news to the Suarez family, she tells them that she is cautious. The next day, a funeral for Penny is held, where everyone is shocked to learn that Penny has a twin sister, Mindy. Penny's life is celebrated, sort of, with Betty giving the eulogy. However, Marc, who turned down the Vogue job, shows up to honor Penny with the announcement that he will take over her job, shocking Betty in a big way. This causes Daniel and Wilhelmina to come up with a compromise: whoever can complete Penny's research before the deadline will succeed Penny as feature editor.

As Betty prepares to track down Penny's hardware at home, Matt stops by for lunch at City Park, only to reveal that he saw Betty kiss Henry, and his jealousy over Henry gets the best of him.

At Penny's home, Betty and Marc try to search for her notes when they are confronted by Mindy, who then takes her sister's notes and throws them out of the window and orders the two to get out. Afterwards, Betty catches up with Matt to offer him tickets to the MAMAs, though he is still bitter over his jealousy with Henry.

Meanwhile, Justin nervously waits to see if he got into performing arts school, hoping that year he'll finally get accepted. However, it turns out that Justin was not accepted, devastating the teen.

At the MAMAs, everyone is there, including Justin, who is whisked away by Marc and is given advice about acceptance, which Justin takes to heart. Matt also shows up and has a talk with Cal, who offers him a job. Then there's Daniel and Wilhelmina, who decided to flip a coin to come up with Penny's replacement. Daniel later tells Betty that she has been promoted to features editor. While Betty feels excited over this, Marc does take it hard. Meanwhile, Cal comes to Wilhelmina to tell her that he knows about Claire's pregnancy, and her abortion, and that it was none of Willy's business.

At the MAMAs, Mode is chosen as the winner. Daniel gives a speech without using his cue cards (which Marc took and gave to Wilhelmina) after he sees Molly. As he went over to see if it was her, Betty told him that Molly wasn't there. Daniel starts to realize that the Molly he thought he saw in the audience was a ghost. She has just died of cancer and he learned the truth after he returned to the apartment, when he sees Molly's body in a body bag being removed from the building by an ambulance team.

Wilhelmina turns to a mysterious person to track down Connor Owens by any means necessary to retrieve the money he stole from Meade Publications as a way to retaliate against the Meade-Hartley alliance, but as she walked into another room, her glass drops as she sees someone in front of her. At the Meade mansion, Claire looks at a piece of paper and burns it in the fireplace. The paper is revealed to be an adoption letter from South Dakota that reveals that she and Cal had a son and that he wasn't aborted after all. Betty's celebration as the new feature editor turns sour when Matt stops by to tell her it's over between them, then stunned her with another surprise: he will now be working at Mode as her new boss. After Matt left, she gets a text from Daniel to come to the apartment, where the two console each other.

Retrieved from "https://uglybetty.fandom.com/wiki/The_Fall_Issue?oldid=10101"
Community content is available under CC-BY-SA unless otherwise noted.