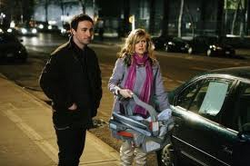 At a local pub, a picture of Wilhelmina is used as target practice during a game of darts for Christina as she joins Betty and Stuart over a round of drinks in the wake of Wilhelmina's claim of William being her son. Later at the Suarez home, Hilda announces that Archie will be running for borough council president, and wants Hilda to be part of his future. Archie also informed her that a TV newscrew will stop by the house and Betty has agreed to provide wardrobe from MODE for Hilda to look good in front of the camera.

At MODE, as Betty covers for Christina at the Closet (again, since she has not come in to work for several days), everyone else has been preparing to wow investor Calvin Hartley with an awesome presentation, complete with, of all surprises, an omelet bar. When Cal hears about William, Wilhelmina is delighted to show him the crib, only to be greeted to a vase with flowers laying on the floor. William is kidnapped and now everyone is a suspect, including Betty, who was earlier greeted by a "all of sudden guess who just showed up for work" Christina. Wilhelmina points the finger at Christina but the police do not believe her, saying that Christina did not leave the Closet. As a result, the presentation, despite Mr. Hartley's reluctant acquiescence, is put on hold.

Being a good friend, Betty consoles Christina as she catches up with her as she was about to leave the building in Stuart's car. But as she jumps in to talks to Christina, Betty hears a baby's voice, and that voice was William! It turns out Christina is the kidnapper. Christina believes that Wilhelmina faked the DNA results and that William is actually her son with Stuart, showing Betty a photo of herself as a baby looking like William. Unfortunately, Christina was right, because back at the Meade building, Wilhelmina later admitted to Marc that she did fake the DNA results after looking at the camera that caught Stuart holding the baby.

After a madcap run from the law and finding sanctuary at the Suarez household, Betty and Christina, with William in tow, try their best to convince a shocked Hilda and an even more shocked Ignacio that William was Christina's and wasn't a kidnapper. But at the same time Archie has brought a TV newscrew to film at the house, causing Hilda to stall them and Archie. Betty then makes a phone call to Claire, who arranges for another test to be administered, but at the last minute, and thanks to an eavsdropping Marc, cops arrive on the scene to arrest Betty, but she is let go. As Christina and Stuart are led off in handcuffs, Betty tries to tell Daniel about what happened and he agrees with her. Later that night, Marc sees Wilhelmina looking at William, but Marc was not in a good mood about Wilhelmina's latest triumph as if he had made a mistake in helping her, opting instead to leave his comments about his boss quiet as he walked away.

At the Suarez home, Betty apologizes to Hilda for what happened, but it turned out that Archie knew all along about what happened, then convinced Betty to talk to Wilhelmina and suggests that she'd do the right thing. The next day Wilhelmina holds a press conference to reveal that William is indeed Christina's son.

Now that they now know the truth about William's true birthright, the Meades try to fire Wilhelmina since she no longer has any claim to the ownership of the company, but oddly enough at the meeting, Cal stuns the Meades by making Wilhelmina's position in the company mandatory or he won't sign. He claims her sharky-ness is what's important and will balance out the Meades' nice image as he tells Daniel, who had no other choice but sign off on the deal leaving Wilhelmina's stake in the company intact. Nevertheless, Wilhelmina then went to talk to Betty and thanked her anyway, then told her that she can take William back to Christina.

With that issue now resolved, Betty hands over William to the McKinneys. As they are reunited, Christina tells Betty that she and Stuart have decided to move back to Scotland with their son, and that they plan to start a fashion business there. Although upset at losing her longtime ally, Betty wishes her the best of luck as they leave the building.

Retrieved from "https://uglybetty.fandom.com/wiki/The_Born_Identity?oldid=10098"
Community content is available under CC-BY-SA unless otherwise noted.