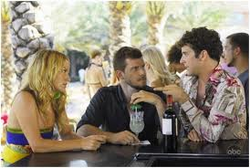 The story begins with Betty pitching the story of swimsuit pioneer Annette Kellerman (who looks a great deal like Betty in the kinescope sequence), the Australian-born swimmer, actress and entertainer, who was arrested in 1907 for indecent exposure after she walked onto a public beach in Boston in a one-piece swimsuit for Mode's upcoming "Fearless" issue. As Wilhelmina reminds the staff about the Bahamas layout and the last shoot she will make for Mode, Marc frets about Nico and Connor and Wilhelmina's future, as this is her last issue. Wilhelmina assures Marc that she has a plan to become an editor at one of Mode's competitors, and that he will continue to be her assistant. Back at Casa Suarez, Hilda shows off a scene from "Extreme Makeover: Home Edition," when Justin arrives with Bobby. Hilda is curious as to why Bobby would bring Justin home, which Bobby claims that he was doing his ex a favor, plus he wanted to get some water. Moments later back at Mode, Betty and Matt talk about how they got Daniel out of the cult and still insist they are still friends. After she leaves, Amanda shows up to give Matt a gift, only to have Matt tell Amanda that she is going to be on the list of Mode personnel that will go to the Bahamas shoot. When Betty reads the roster on her e-mail, she sees Amanda's name, then confront Marc, who after seeing Matt and Amanda together, Marc spills the beans to Betty.

At home, Betty tells Hilda and Justin about Matt's interest in Amanda, and starts questioning why she would go with Matt, although Betty is not going to the Bahamas. When Betty learns that Hilda and Archie would love to go to the Bahamas, Betty says that she can get them tickets, while Justin shows Betty a scrapbook featuring Shakira, called "My Life With Shakira", and wants Betty to get a autograph from her. The next day Betty tries to convince Daniel that he will have a great time in The Bahamas, even though people at work are still joking about the Community of the Phoenix, something he wants to forget. Betty later sees Amanda and Matt by the reception desk and hides. When Wilhelmina and Marc walk by to discuss the shoot and the possibility of Wilhelmina to take the Editor-In-Chief job at Isabella, only to have Marc talking about having a vacation himself, they turn around and see Betty. However, its Wilhelmina who tells Betty that she will now accompanying her to the Bahamas shoot as her assistant, and at the same time tells Marc that he will finally get a vacation. Later that day at the Suarezes, Hilda and Archie talk about getting away to the Bahamas after getting tickets from Betty, but Archie had made other plans and fears that going on a vacation would damage his political career. This would cause Hilda to become upset over Archie's decision.

In The Bahamas, Wilhelmina lays down the rules to Betty, but Betty is distracted by Matt and Amanda. She reports back to Hilda via cellphone because she sees the two at every opportunity. As Betty goes to her room, she sees Shakira. But back at home, Hilda, after getting off the phone with her sister, reads a post-it from Ignacio about the furnace and when she tries turn it on, the handle comes apart. At the door, Bobby, who wanted to bring Justin's Playbill that he left in the car, stops by to see her and ends up helping Hilda fix the furnace, but Hilda tells Bobby that she is in a relationship with Archie. Bobby is aware of this, but then makes a confession that the reason he wanted to see Hilda was that he still had feelings for her. Bobby then leaves, saying that she should hire someone to fix the furnace.

At an outdoor bar, Marc sees Daniel and the two bond over being single. Marc does help him out with a woman named Savannah, who is charmed that Daniel is "down with the pink team". However, while in bed, Daniel cannot achieve an erection, due to the recent loss of Molly.

During the shoot Wilhelmina is stunned to see her rival, Penelope Graybridge, on Fashion TV to accept the new job as Editor-In-Chief atIsabella, while Betty finally confronts Amanda over Matt, which leads the two into a race down the water slide to see who he will choose. Although Betty wins, Amanda tells her that it was Matt who invited her. Matt arrives to see this, but Betty tells the two that she is cool with the two together and they leave together. However, this pairing would end up being short lived. During a romantic evening on the beach, Amanda is spoiled by Matt over dinner and candlelight. However, Amanda is starting to sense that Matt still has feelings for Betty, so before she walked away, Amanda tells Matt to tell Betty the truth.

Marc, who after witnessing Betty seeing Matt and Amanda leave together, arrives to tell Betty that Wilhelmina is missing. Speaking of Wilhelmina, it looks like while she was on the beach, a surprising person shows up. Its Connor and it looks like he was never dead. Wilhelmina slaps him, but the two finally kiss and have a passionate romp on the beach, followed by a passionate afternoon between the sheets. As Betty arrives to see Wilhelmina to tell her that the wrangler passed out on the set, a topless Wilhelmina holding a bucket of ice cubes surprises Betty. As Betty explains to Wilhelmina about the shoot going wrong, Wilhelmina is not at all worried and tells Betty to relax and take care of it, as it appears that Wilhelmina is on a natural high from the afternoon delight she had with Connor in the suite that Betty was going to.

Later on back at the bar, Daniel tells Marc that although Savannah was interesting, it wasn't meant to be. Daniel then tells Marc, who still felt unlucky in finding a guy, that Wilhelmina was lucky to have him as an assistant, which Marc took as a compliment. Daniel then helps Marc finally land a guy named Troy. As Amanda arrives, Marc tells Amanda to console Daniel as he goes to meet Troy. Daniel and Amanda then talked about their past and romantic failures and discover that they seem to have a lot in common.

During the evening at a party, Betty, who now has to keep a eye on the models, tries to loosen up, but Matt shows up to save her, saying that Amanda told him to go back (to Betty), then they kiss. The rotating bedroom scenes looked very busy as Daniel and Amanda, Betty and Matt, Marc and Troy (who happens to be after Marc for some time, as Betty later tells him), and Wilhelmina and Connor end up sleeping together, respectively that is, as does Hilda and Bobby back in Queens.

The following morning, Marc arrives to tell Betty and Matt that the models are missing and took a trip to Cuba with several guys from the party. When Betty sees Justin's Shakira book, she comes up with an idea to save the project. She begs Shakira to do the shoot, and Shakira agrees after Betty pitches the idea of wearing a vintage swimsuit, similar to the suit "Annette Kellerman" wears during the intro. The shoot pleases Betty and Wilhelmina, but is interrupted by the Bahamian authorities and the FBI, who were tipped off by someone who found out that Connor was staying there. To cover things up, Connor tells Wilhelmina to take credit for turning him in. They kiss before they go through with the plan. Connor is arrested and everyone at the shoot are surprised to see him walk out in handcuffs.

Back home at the Suarezes', Betty gives Justin a souvenir from her trip (a straw that Shakira used), while Archie shows up to tell Hilda that he was sorry about not going to the Bahamas with her. But as the two hug, Hilda feels like she betrayed Archie by sleeping with Bobby.

Back at work, Daniel and Amanda briefly talk about what happened at the resort, coming to the realization that there is no baggage between them despite their fling, leaving them in a mutually beneficial place emotionally. Meanwhile, Wilhelmina, who thanks to "turning in Connor" can keep her job, learns from Marc that he has accepted Daniel's offer to be his new assistant, which visibly upsets her. Finally, Betty and Matt talk about the future holds for both of them now that are a couple again.

Retrieved from "https://uglybetty.fandom.com/wiki/The_Bahamas_Triangle?oldid=8602"
Community content is available under CC-BY-SA unless otherwise noted.