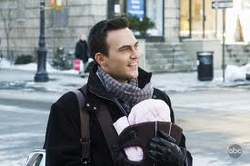 As the day begins, It looks like the events in the wake of Connor's recent cleaning of Meade Publications, everybody trying to survive financially.For the Suarez family, even as Betty tries her best to cut back on her work attire (sort of), the family are noticing Ignacio watching

"Kitchen Rumble", a cooking show hosted by Frankie Burrata, in which he challenges anyone t

o beat him at his cooking from their home. But moments later, Hilda gets a surprise letter from their landlord: they're being evicted from their home because the owner has opted to sell the place. The family, seeing that they have no resources, tries unusual money-making schemes; Betty going to Amanda and Marc, Hilda charging $200.00 for a perm and Justin taking to the streets as a performer. As those attempts fail, Ignacio has succeeded in getting the challenge from Burrata to come to the residence so they can win the $10,000 cook-off.

Meanwhile, Daniel, Wilhelmina and Claire each bicker over the now-bankrupt company, not to mention Daniel and Wilhelmina being at odds over their relationships with Molly and Connor which started this freefall. Claire of course comes up with a brainstorm idea: have the government bail them out. While they like the idea, it looks like Daniel and Wilhelmina are having a hard time trying to make ends meet en route to a hearing to determine if the company qualifies as they first endure a bus ride on a NYCMTA bus that doesn't accept credit cards or (US $) 50.00 bills. After their first day of grilling by a financial committee, the two have lunch at an expensive restaurant to console themselves over what has happened.

On the day of the taping, the family, along with Matt, are on hand to see Ignacio go face to face with Burrata, who has a weird way of getting to know his challengers as Ignacio would find out soon enough. As the show starts taping, the competition between the two gets intense as they try to beat the clock and get their meal completed before they can serve the judges. Unfortunately, just ten minutes into the final stage, Ignacio began to throws out his back and could not continue, even as Burrata told the viewers that there are no time outs on the show. So with no other choice, the family turn to Betty, who ends up finishing the meal. As the meals are served to the judges, they finally declared their winner: Frankie Burrata! The Suarezes are stunned by this loss in more ways than one.

The following day, Ignacio and Hilda get a major surprise in the mail: $10,000.00! While Hilda was excited about this, Betty believed that it might have came from Daniel, who had offered earlier to help pay for the home, but Daniel said it wasn't him who sent the money.

Also that same day, it looks like that visit to the restaurant would be bought up by the committee chairman after he shows off a picture of Daniel and Wilhelmina at the restaurant, even as the two tried to explain what happened. However the committee rejected their request. Back at MODE, Daniel tells Wilhelmina and Claire about another idea that would keep the company afloat by selling his assets and stocks, a move spurred on by Wilhelmina and Claire, who also opted to spin-off their belongings.

That evening at a bar, Betty and Matt chat over about how her family ended up with the money. Matt, who then thanked Betty for bailing him out even after losing his wallet and coming up short of cash, then tells her that now that he can pay for the drinks and when the waiter came to give Matt the bill, Matt signed the receipt and went to the bathroom. Unfortunately, Betty would get a look at the signature, which matched that of the check! When Matt returned, Betty confronted him about why he did it. Matt then explained that he comes from a wealthy family and that he doesn't care about his background. Betty was not happy about him helping her family and leaves.

Later on, Betty returns and discovers that Hilda and Justin are stunned over Ignacio accepting Burrata's offer to work at his restaurant. It turned out that Burrata had a change of heart after the taping. The family can now keep their home, just in time for them to see Ignacio on "Kitchen Rumble".

The thoughts of Molly and Connor were still fresh in the minds of Daniel and Wilhelmina. As Wilhelmina opens her desk and sees a picture of Connor for a brief moment, Daniel, with the encouragement of Betty, finally goes after Molly and tells her that he wants to still be there for her as she faces her battle with cancer.

Finally, in between these events, Marc tries to help Amanda deal with confronting her adopted mother after she lied to her two years earlier, while Marc spots a hunk named Timothy with child in tow during a baby shopping spree with Amanda that same day. For Marc, his idea to win over his new obsession by lying to him about being a dad himself, would mean using William to lure him. So they turn to Christina, who is watching William, saying that Wilhelmina wants him to bond with the baby. However, those plans get scrubbed when Timothy shows up sans baby, resulting in Marc lying to the guy that Amanda was his nanny. As Amanda returned William to Christina, Christina gave some motherly advice about being truthful, especially about being adopted. In the end, Marc returned hours later to tell Amanda that the guy of his dreams wasn't that interesting to him, then apologized to Amanda for bailing out on her. Amanda then called her adopted mother to talk to her.