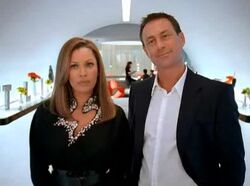 In the wake of Ignacio's recent heart attack, in which he is now recuperating from home after having quadruple-bypass surgery, Betty, Hildaand Justin end up trying to cater to his every whim. Hilda and Betty agree to work out a deal to help out with Ignacio's medical appointments.

Afterward, Betty returns to her apartment, where she discovers Amanda is worried about her, but at the same time discovers that her place needs work. Not only that, at work her desk is filled with assignments and letters. As she starts trying to make up for two weeks of lost work,Daniel and Claire asked her about how her dad was doing, with Claire recommending a doctor to Betty that Ignacio can see at a hospital so he can if is in perfect condition. Betty takes the offer and agrees to stay with him for the next four hours and assures Hilda that she is on top of things.

Meanwhile, Daniel, Molly, Connor and Wilhelmina try to conceal their escalating love connections, with Daniel and Molly spending the time in Florida while Wilhelmina and Connor spending the time in Aspen. The relationship between the latter has begun to take its toll on Marc, who finds himself in the middle of their secret affair, especially when he was stuck entertaining a client. This puts Marc in an awkward situation as he ends up taking over the job to cover for Wilhelmina while she and Conner had their tryst, leading to Wilhelmina dismissing Marc from the meeting after she berates him for doing her job. However hours later she has a change of heart as Marc expresses his true feelings about doing her work that she neglected, as the following day she trusts Marc on entertaining another client while she goes off to have lunch with a potential prospect.

At the same time, Betty gets a call from Daniel after he learns that one of the letters featuring Daniel and Molly were sent to Suzuki St. Pierre and when Daniel learns of this, Betty skips out of the hospital to stop him from using it on Fashion Buzz. After getting the info from an "ex-boyfriend" of Suzuki's who works at Mode, Daniel and Betty head to New Jersey, where they discover the truth about Suzuki: his real name is Byron Wu, and he is a straight guy who is married with two sons. Afterward, Byron agrees not to use the photos as they promise to keep his secret. However, the photo featuring Molly holding hands with Daniel did end up in the newspaper with Daniel cut out; Connor later spots it, giving him suspicion to find out whose hand she is holding.

Back at the hospital, Betty learns that Ignacio is missing and ends up telling Hilda what happened. As the two return to the hospital, they learn that their father's test results came back negative, but outside the hospital the two started arguing over who should be responsible for looking out for Ignacio. Later that evening at home, Ignacio has to settle the situation by hiring a nurse thanks to his Medicaid coverage, thus upsetting the two. Later that evening, after seeing Amanda looking over the bills, Betty decides that it was time to move out of the apartment so she can return to help out the family.