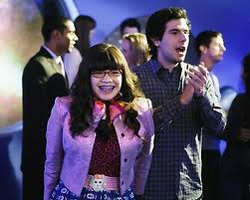 As the day begins, we witness Wilhelmina walking out of the subway and Daniel trying to make it off the bus. But its Betty who gets the limo treatment to work by Matt. As she walks in to Mode, she discovers that everything is being repossessed and its even freaking out Amanda and Marc. After she reaches her desk, she signs a letter from a courier, who then asks for her fingerprints. It turns out that Betty and her family (after Justin calls her) have been invited to the Calvin Hartley Foundation's annual Easter Egg hunt.

Calvin Hartley is of course Matt's father. While Betty sees this as a chance to get closer to Matt, Daniel seizes the opportunity to get Mode a bailout, after Betty makes a suggestion that Daniel later ponders, and the following day takes up the offer. After spending an evening with the family and Matt, who then tells her about how he feels about his father, Betty all of a sudden feels upset over making that offer to Daniel and the next day tries to talk him out of it since she is worried about doing it behind Matt's back. This would come to a head when Matt stops by Mode to see her as Betty tries to stall him, but its too late and the two felt betrayed, making both guys upset with Betty over this scheme because Matt wanted stay as far away from his family life as possible and Daniel learned that Betty was not as truthful to him about trying to set up the meeting.

Daniel and Wilhelmina are forced with handing out pink slips to employees. Betty, Marc and Amanda witnesses a person handing out the termination letters, and when he reaches Amanda's desk, he hands one... to receptionist Amanda Tanen-Sommers! This prompts Betty to go to Daniel and get him an invitation to the event. At the event, the Suarezes meet Calvin Hartley, who seems to like Betty after what she told his ex-wife Victoria. While the family, especially Hilda, search for eggs, Betty managed to sneak Daniel in while disguised as a busboy, only to get thrown out by Matt, who then changed his mind after Betty told him about what happened at work. Matt later has a change of heart and tells Betty that he believes she was doing the right thing and forgives her as the two made up. However, he explains that his father can be extremely controlling, and that he wanted to keep his father away from his own career in the publishing industry as well as Betty's. He warns Betty that Cal can be "Satan" if he make a deal with Daniel.

Daniel is given the chance to talk to Cal, but all Cal wanted to talk about was why the person who shows as the Easter Bunny failed to show up, intimating that unless someone dresses up as the Easter Bunny he's going to be in no mood to talk business. Daniel takes the hint, dressing up as the Easter bunny, and it works. Daniel later tells Betty that Calvin wants to help save the company. Betty is remorseful for the humiliation that Cal put Daniel through by forcing him into a pink bunny suit, but Daniel says it was worth the embarrassment if allowing Cal to act like a "big man" makes him willing to invest in the company. The following day Betty walks in and sees Amanda and Marc celebrate Amanda being spared from the chopping block and everything else returning to the 28th floor, along with a gift basket courtesy of Cal on Betty's desk. The gift basket contains large bunches of carrots that are clearly a message for Daniel and serve as a sinister hint that Cal isn't going to let Daniel, or his son's girlfriend, forget that they owe him, just as Matt hinted to Betty earlier.

During a photo shoot, a photographer compliments Wilhelmina on William, but after Wilhelmina hands the baby over to Christina, the photographer notes how much the baby looks like Christina, thus putting doubts into Wilhelmina. As she and Marc take a look at the photos, Marc points out that William does look like Christina, prompting her to talk to a doctor, who suggests that Christina might've had sexual intercourse before she was injected with the sperm. After she becomes suspicious of Marc being chummy during lunch, Christina and Stuart begin to catch on about William, since they did indeed had sex two days earlier. Both Christina and Wilhelmina square off over the question of who is William's natural mother. After receiving a letter from the lab, Wilhelmina asks Christina to read the results, and it turned out that Wilhelmina is the mother of William. This news devastates Christina in a big way, particularly after Wilhelmina informs her that under the circumstances it is no longer appropriate for her to serve as William's nanny, giving indications that was hinted earlier by Wilhelmina when she told Marc that if William was Christina's son she would lose her stake in Meade Publications.

Retrieved from "https://uglybetty.fandom.com/wiki/Rabbit_Test?oldid=10097"
Community content is available under CC-BY-SA unless otherwise noted.