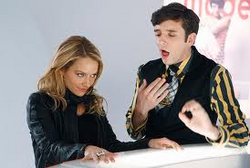 It's 7:36 PM, and Betty just got the phone with Ignacio when she is spooked by Matt, who came by to talk and as he went to hug her, it was to straighten her hair out. Betty also runs into Daniel, who talk about their plans for a lunch to help find Daniel's assistant. When Wilhelmina run into the two, she was spooked over Daniel thanking her for being part of an event involving Tibetan orphans, and as sh

e walked into the office she confronted Marc about he used her name to be the recipient, which will be held at her apartment. Marc hopes that the event will repair her image, even though Wilhelmina is cash-strapped. Later that evening, Daniel and Natalie talk about the assistant's job. Natalie seems to be interested in it.

The next day, Matt asked Betty about going to the event, but with other people. This is what Betty didn't want to hear, but after she got off the phone with Hilda, she sees Daniel by her former desk to show off his new assistant...Natalie! Betty is stunned. Betty is not so sure about this and when Daniel asks her to help Natalie out she reluctantly agrees. Natalie is a quick learner and she waste no time removing anything with Betty's name on it, including her computer files and her answering machine greeting.

Wilhelmina is totally clueless about being involved in an event for a cause that she no idea what they actually do, so Marc tries to help the press by making up the story of how she got into this mess as if she had been involved. When Wilhelmina gets a phone call from Nico, she races home, leaves Marc and the press to scratch their heads. As she returns to her apartment, both Wili and Nico are confronted by detective Castelar, who insists on a bribe to keep what he discovered (the blood stains) at the yacht quiet. Wilhelmina refuses and vows to go to great lengths to protect Nico. As she returned to the office, Wilhelmina dragged Marc into the fray by coming clean about Nico, then gave him Castelar's card to find any info on him.

As Marc runs into Amanda that evening, they're interrupted by Matt, who asks Amanda for a favor, and Marc doesn't like it. Later the next day Matt asks Amanda about going to the party with him, if she was interested, which Amanda thought was a yes. Marc, not happy about whether Amanda will accept the offer, believes that going with Matt is wrong because Betty still may have feelings for Matt. Marc suggests that Amanda tells Betty the truth, but Amanda is afraid that it may hurt Betty's feelings. When Betty runs into Amanda at the desk, Amanda asks Betty if she was going to the event. When Betty told her she was, Amanda freaked out, even when Matt's name came up. Amanda then hides the truth from Betty when she learns that Matt haven't asked her out yet either by setting her up with potential dates. Betty turns down the offer, believing that Matt will ask her.

During a meeting with Cal and Claire, Daniel is not happy with Cal's decision to cut corners on advertising by cutting a regular feature from the magazine. When Cal told him to calm down "Son", Daniel stopped there and told him he wasn't his son and Claire, looking as if she almost freaked out, ended the meeting. Claire and Cal believed that their affair might hurt their families but Claire, being upset over Cal's feelings about their affair, is not going to let this one come between her and Daniel.

At lunch, Betty was shocked to see Daniel showing up with Natalie. This is not what Betty was expecting, even as Natalie interjects herself into the conversation. As Betty returned to the office, she tells Amanda that she will take up that offer of setting her up for the event, prompting Amanda to panic over that response. Also returning to the office was Daniel, who after looking at the layout and discovered several pages, including the regular feature that he wanted to keep in, missing, Megan told him that it was Claire who made the decision and when he walked into her office Daniel sees both his mother and Cal kissing. Daniel couldn't believe this and walks out on them after she tried to explain about her relationship with Cal. As he returned to his office, Natalie began to seed some theories in Daniel's mind by accusing his mother, Cal, and Betty (of whom she sees as an obstacle) of causing "Drama" for him. While Daniel doesn't believe that Betty would be that capable, Natalie assures him that she can be a problem and thinks that he needs to break away from Betty's grip.

Over at Amanda's that evening, Betty is stunned by Amanda's choice of guys for Betty. It turns out that Amanda has been placing ads and Betty is not interested in any of these guys after one of them mentioned Betty's "ad" (placed by Amanda) on Craigslist. After she leaves the apartment, she gets a call from Claire for help. When Betty returns to the office to talk to Daniel, she is confronted by Natalie, who does her best to keep Betty away from him. As Daniel walked into the office, Betty tried to talk to him about what happened between him and his mother. But it appears that Daniel's feelings towards Betty has turned cold as Natalie watches, resulting in Betty leaving the office upset. Hours later at the Suarez home, Betty gets a call from Amanda to apologize. Believing that she was being a good friend, Betty tells Amanda that she won't be going to the event. Hilda and Justin believe Betty just made a mistake in not going, which prompts Betty to change her mind. So Justin decides to show off his "Project Runway Moment" by taking Hilda's dress that she can't fit in and redisgn it for his aunt.

In another part of town that same evening, Marc and Wilhelmina pay a visit to a brothel to get information on Castelar, but are shocked to learn that the person they thought was the one blackmailing her was the real Oskar Castelar and not the one Wilhelmina knew. However blocks away we see Nico walking by herself, when that "detective" shows up...and then they kiss! It turns out that Nico and the phony Castelar—who happens to be her supposedly dead boyfriend Johnathan—are trying to extort money from Wilhelmina. Nico, believing that her mother has the money, is determined to play her in more ways than one.

At the event that evening, Betty does go stag in a dress designed by Justin. But just as Amanda arrives to tell Betty the truth, they both see Matt with another woman. Both are surprised at this, but its Amanda's feelings that got hurt the most. Amanda decided at this point not to tell Betty about her feelings for Matt. When Matt ran into Amanda, he told her that she wasn't the only choice and that he wanted ask six other people out. Amanda, hearing that comment, felt like a fool and walked off. Betty also run into Daniel and Natalie, who then tells her that she wants to be friends. As Betty and Daniel patches things up, Natalie excuses herself to take a phone call. But as she answers the phone, it appears that something sinister is going down when Natalie informs whoever was on the other end of that cellphone that she will have Daniel under their control soon.

It looks like host Wilhelmina is still not pleased at how she got railroaded into hosting this event and is afraid to go out and embarrass herself. When Nico confronts her mother and tells her that she will turn herself in, Wilhelmina insists on her not to. During the speech, Wilhelmina tells the crowd that she was honored to help with the event and saving the Tibetian orphans, saying that she will everything to help protect the children. That message not only sunk into Wilhelmina's mind, but also Claire's, who after leaving the event and still upset about over Cal's remarks about "not bringing a child into the world," called the adoption agency to help find the son she had with Cal.

Finally, at the dancefloor, Betty is swaying to La Roux's "Bulletproof" when Matt shows up to get a chance to talk things over, mostly about each other. However, Betty tells Matt that maybe its better that they remain just friends and they agree that would be best. As Betty goes stepping on the dancefloor to dance by herself, it appears that Matt's feelings for Betty are still there as he watches her dancing to Billy Idol's "Dancing with Myself".

Retrieved from "https://uglybetty.fandom.com/wiki/Plus_None?oldid=8599"
Community content is available under CC-BY-SA unless otherwise noted.