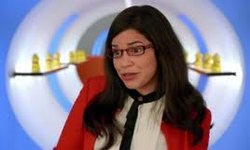 The story starts off with Fashion TV reporter Suzuki St. Pierre reporting on the recent departure of Wilhelmina from Mode. There are shots of Miss Slater letting herself go and wearing sweats and garden clogs in public, which prompts a tabloid feeding frenzy. But Daniel wants to talk about the Community of the Phoenix, prompting Suzuki to end the interview.

The effects of Wilhelmina (Wili) being unemployed have taken a toll on Marc, who tried to slap some s

ense into her. Wili isn't fazed and says that even though Claire has refused to let her back, she hopes to find a way to save Nico's "ass" by finding money to pay off Oskar. The sudden change in Wili's appearance has Marc really concerned for the ex-Mode EIC. At home, Nico is upset when Wili decides to send her daughter to Venezuela, but Nico tells her she wants to stay in New York.

As Marc returns to Mode, he runs into Amanda who talks about Matt, but Marc still has doubts about Amanda falling for Betty's ex. Amanda later walks up to Matt and asks him out for a date. As Claire passes by Amanda, Amanda gives her a envelope. It looks like Claire just received a letter from the South Dakota department of Children's Services. It's a letter and picture of her son.

It looks like Daniel is letting the leaders of the Community of the Phoenix call the shots at Mode. Betty becomes very concerned about Daniel and his behavior. He lets Community members sit in on their meeting, where they are negative about the upcoming Bahamas shoot. Betty is upset and tries to reason with Daniel, but she gets nowhere. She follows him to his office and is locked out by Bennett. Moments later, Betty confronts Daniel in the men's room where she convinces him to do a story on the group. That's when Betty schemes with Claire to break through to him by infiltrating the organization.

At the Community offices, Betty interviews Bennett in a effort to find out more. When Bennett refuses to let her see the Level 7 room, Betty starts to question Bennett's motives. In response, Bennett brings up Betty's late mother, which in turn makes Betty wonder how he knew about Rosa when she never mentioned her.

During the afternoon Marc, embarrassed by Wili in the press, races back to her apartment to throw out Wili's frumpy clothes, when all of a sudden he hears Nico and the detective talking about Wili. He returns to warn Wili, and when Nico returns, Wili confronts her. But instead Marc gets thrown out of the apartment as Wili believes her daughter's explanation. Hours later, Wili shows Nico a family heirloom, a necklace that she will sell in order to pay off the detective. This puts new ideas into Nico's head.

At Matt's place, Matt teaches Amanda how to play Wii tennis. When Amanda mentions Bennett to Matt, Matt worries because he has experienced Bennett's groups but only got to Level 2. Matt immediately calls Daniel's office.

Meanwhile, Claire asks Betty to hack into Daniel's laptop to check his financial records, but Daniel catches them, leading to a confrontation. Unfortunately, Natalie notifies Bennett and calls Daniel away. Claire picks up the call from Matt, warning them about Bennett and Level 7, and that the tea Daniel has been drinking is a drug. Matt says that when he was in Canada, Bennett used the same approach (the tea) which resulted in the death of a member. They race to stop Daniel, but he has already left with Natalie.

Moments later at the center, Betty, Claire, Amanda and Matt plan to rescue Daniel. However they discover that he is not at the center and they are split up. Matt makes a scene to distract the security guards, and he is arrested for trespassing because Bennett barred him from the center for life. Claire and Amanda end up in a bereavement group where Amanda participates, but Claire is not pleased when she brings up Fey. Betty discovers the Level 7 room is empty. Instead Bennett took him to Molly's apartment, where Betty and Claire step in to stop Daniel from being drugged by Bennett. Daniel sees Molly in a hallucination, but it's actually Betty doing the talking. Daniel believes that Molly is convincing him to let go as Betty finally gets through to Daniel. It works and before he lets the image of Molly go, Daniel kisses her goodbye, but he actually kisses Betty. As they leave Molly's apartment, Daniel tries to talk some sense into Natalie, but Natalie blames him for ruining her chance to be with her late boyfriend, saying that she wanted Daniel to experience the event with her. She leaves, still believing that Bennett will help her.

The following day Matt and Amanda spend some time talking, when Claire runs into Amanda to finally bury the hatchet over Fey. Amanda then tells her about the adoption letter and tells her she should contact him. Claire takes that advice and makes arrangements to see him.

That same morning at Wili's apartment, Nico opens the safe to steal the necklace but it's empty. She is caught by Wili, who now knows what her daughter is capable of. She realizes that Nico and her boyfriend planned the murder scheme to get money from her, so Wili throws Nico out and tells her never to come back. Nico leaves but this rift might not be over as the two look at each other.

With Betty's help, Daniel finally faces the task of cleaning Molly's things out of her apartment. Betty helps him decide what to keep and what to let go of. When Daniel asks if he actually kissed Betty, Betty replies that he did, but he kissed her eyebrow because she is shorter than Molly. Betty then looks at the beads and Daniel tells her to throw them away, which she does.

Retrieved from "https://uglybetty.fandom.com/wiki/Level_(7)_With_Me?oldid=8601"
Community content is available under CC-BY-SA unless otherwise noted.