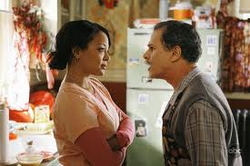 Betty returns home with her arms full of moving boxes, but slips and falls after coming through the door. She regains her composure and is introduced to Ignacio's nurse, Elena, who is warmly at home with the family. At the same time, Betty and Amanda are looking for a new roommate, but Betty is getting mixed signals about leaving when she and Amanda see Jesse outside his place playing his guitar. After getting together, Betty and Jesse share some wine and have a long conversation that ends in what seems like a serious kiss, only to be interrupted by Jesse's phone which features one of his songs on ringtone. Jesse ignores the call.

Hours later, after being woken up by Halston licking her face, Betty is quizzed by Amanda and later at work by Marc about the hours that lead up to the kiss, which is oddly acted out by Amanda and Marc. They reach the conclusion that Jesse was either serious... or drunk. Later that evening, Betty gets a voicemail and as she walks in, tells Amanda that Jesse has been avoiding her. This has Betty really confused over her decision about whether she should stay in the city or return home to her family.

The following day, Betty goes to the coffeehouse where Jesse is performing to confront him; Jesse confesses that he felt horrible about avoiding Betty and tries to convince her to go out with him. During their dinner date, Jesse's conversation focused on one thing: himself. As Betty saw the real Jesse and how truly self-absorbed he was, she had second thoughts and told Jesse he was not the one for her. Betty decided to leave her apartment, but not before telling Amanda she found a new roommate for her: Marc! Amanda and Marc are delighted.

Back at the Suarez home, Ignacio's working relationship with Elena seems to be getting off on the wrong foot, as he is upset about how Elena is changing his habits, like cutting fatty foods and trying to get him to take a walk with her. Later that evening the two discuss trying to adjust, but even after that Ignacio still feels bitter as Elena leaves. When Elena returns the next morning, she and Hilda discover Ignacio in a good mood during breakfast. Ignacio also asks Elena to join him for a walk.

Meanwhile, Daniel and Molly try their best to keep their relationship a secret, but Connor is still puzzled by the tabloid photo of Molly, resulting in Wilhelmina becoming suspicious of Connor's recent avoidance of her. Connor invites a somewhat nervous Daniel to work out with him at the gym; during a round of boxing, Daniel can sense Connor's tension as Connor declares he will find out who Molly's "mystery man" really is.

Later that evening Connor drives Daniel to Molly's neighborhood so he can spy on her, hoping to spot the "new guy." But they're not the only ones there: Wilhelmina and Marc are spying on the two... and on Betty, who Daniel had previously asked to deliver some flowers to Molly from him. Betty is unaware of Connor's "stakeout" until Daniel spots her and grabs the flowers from her. When Connor sees this, he looks at the flowers and sees a card signed by "RJ"; Daniel convinces Connor to focus on Wilhelmina, and they drive away. Wilhelmina and Marc also leave, but not before they spot Molly walking home. An upset Wilhelmina realizes that Connor still has feelings for Molly.

At work, Wilhelmina confronts Connor about Molly and delivers an ultimatum: he must choose between them. However, Connor asks Daniel to join him for another round of boxing at the gym. After trading some punches, Connor knocks Daniel down and calls him "RJ" - he put two and two together after seeing a t-shirt with "Rich Jerk" (Molly's nickname for Daniel, shortened to "RJ") on Daniel's desk, then the note with Molly's flowers.

The next day, Connor asks Daniel, who is sporting a very obvious black eye, to join him for a business meeting. It seems things have been smoothed over. Connor then goes to Wilhelmina's office, admits he had a hard time letting go of Molly, but says he's now all hers... even if he has to beg.