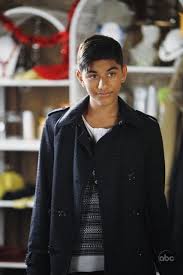 Justin Suarez is a fictional character on the American comedy-drama series Ugly Betty. He is portrayed by actor Mark Indelicato.

Justin lives with his mother Hilda, his aunt Betty, and his grandfather Ignacio. His biological father is Santos who is murdered in the finale of Season 1.

Justin is quite fashion conscious and exhibits model-like behavior, such as commenting on his own body image and being food conscious. His knowledge about the fashion industry, from reading MODE, where Betty works, and watching Fashion TV, is among the reasons his aunt influences him. Justin exhibits stereotypical gay behavior which propels some of the story lines including his involvement in performing arts. As he is still a young teenager, his adolescent sexuality is still being developed in story lines. It is revealed in Season 4 that Justin is gay.

Slate magazine named the character as one of the reasons they were looking forward to the return of the show in fall 2007.

While Hilda tries to convince Betty to try a line of work other than the fashion industry, Justin supports Betty and convinces her to continue and pursue her dreams. Justin is quite fashion conscious and exhibits model-like behavior, such as commenting on his own body image and being food conscious. This behavior concerns Hilda, who would rather see Justin act more like a "normal" boy; however, in the episode "Lose the Boss" his mother says to Justin's father Santos, "He's comfortable with who he is and so am I." Justin shows an interest in the performing arts and home economics. He is a fan of Fashion TV and idolizes Martha Stewart and Gene Kelly. His knowledge about the fashion industry, from reading MODE and watching Fashion TV, is one of the reasons his aunt influences him.

On the subway as he, Hilda, and Santos are to see Hairspray, Justin sings the opening number "Good Morning Baltimore" to the audience of the subway, meant towards Santos to tell him all about the show. One passenger calls him a fairy, much to the anger of Santos. In the Season 1 finale, Justin plays Tony in his school's production of West Side Story; he won the role after putting walnuts in his sandwich he gave to the actual lead after Justin learned he had an allergy to products containing nuts. As he is on stage, Justin sings the interludes while everyone's story temporarily concludes the season. As his character in the musical is shot and dies on stage, his father Santos is shot and killed during a hold-up at a convenience store.

Three weeks after his father's death, Justin is bored with summer camp so he sneaks into the Meade Publications building to spy on MODE magazine. After he is caught, Betty arranges for him to become an intern for a few weeks before school as an alternative to summer camp. However, his enthusiasm of being an intern has already caused an unusual ripple effect for the Suarezes, as he told Marc, who was training him, everything about their family including Ignatio's illegal status, resulting in Betty giving in to Wilhelmina in exchange for getting Ignacio back into the United States. His thoughts of his late father has begun to settle in after he visits the store where he was shot after the clerk told him Santos was a hero and he must be just like him, Justin told him that he wasn't like his father. When Justin returned home, he chose his father's basketball for the one keepsake he would retain, and made a change in personality. He had affected a contempt for his old interests, stopped getting good grades, skipping school, hanging out with thugs, and has been shown drinking beer and making out with a girl in efforts to adopt a more "macho" image. This all comes to a head after Justin is arrested for stealing and crashing Hilda's car. Hilda decides it's time to confront him and Justin finally realizes he was spiraling out of control and if he didn’t stop he could end up being no different than the thug who killed his father.

Early on in the third season, Justin clashes with a bully at school. When Justin tries out for a Broadway musical, he is shocked to find that the bully, Randy, is also trying out. They are still hostile and competitive with one another at first; but when they fail to get the role they start to bond. Shortly afterwards Randy stops being friends with him due to peer pressure about Justin's effeminacy. Later on, Justin applies for a performing arts school, only to be rejected.

After being rejected from a performing arts school, Justin attends a public high school where he is bullied on the very first day. He ends up relying on Marc for emotional support. Things turn around when his mom rounds up enough money to send him to a private performing arts school. Questions of his sexual orientation come up during the homecoming at the school, when Marc sees Justin bullied but not responding. Marc encourages Justin to befriend one of the cheerleaders, and both Justin and Marc end up helping update the cheerleading squad's uniforms and routine. At the homecoming rally, the same cheerleader apologizes to Betty and Marc to warn about the school jocks' prank on Justin. In the rally, Justin is named the school's homecoming queen but following Marc's advice to take control and turn the joke around, Justin gives the tiara and flowers to his mother Hilda to make up for her homecoming, which she missed as she was pregnant with Justin.

Justin starts hanging out more with his "serious actor" friends, and is accepted into a performing-arts class. He takes up smoking in order to impress his friends, and despite repeated denials that he is gay, appears to develop feelings for Austin, a boy in his acting class. The boys kiss during an argument over a girl they both claim to like, and later begin to date secretly. Hilda's fiance Bobby accidentally breaks the secret to the family after finding the boys kissing on the porch one night. When the family reacts by planning an over-the-top "Coming Out" party for Justin, Marc intervenes and convinces them to let Justin come out to them in his own way. Justin eventually does when he quietly asks Austin to dance during Hilda's wedding reception.

Prior to the character's coming out in Season 4, Justin was the subject of much media speculation concerning his sexuality, although there was never a definitive statement on the subject either on the show or from the show runners. A February 2007 piece in USA Today said on the subject, "Justin's sexuality has never been addressed on the show, but Betty creator Silvio Horta, who is gay and came out to his Cuban-American family at age 19, says the character will experience "the journey" as he matures. "I see myself in him," Horta says. "Growing up, I certainly felt like an outsider at times. But there's this sweet innocence in Justin that sees the positive." Horta later commented more definitively on Justin's sexuality, saying, "[Justin]'s twelve and we want to let things proceed as they would normally. There's so much to explore with this kid as he comes into adolescence and what it would be like if he were gay...which he probably is."

Indelicato has said about Justin, "My fan mail is mostly kids, especially kids that don't really fit in and people don't really understand them. They go, 'Thank you, because you're helping me to be understood by my peers,' and anybody else who doesn't understand them" He has also said that he avoids websites, forums and blogs about the show because of the negative feedback and remarks made towards his character on the show. Ana Ortiz, who plays Hilda, said "One of my absolute favorite character traits of Hilda is that she feels that as long as he's happy, I'm happy. I'm not going to change him, I'm not going to judge him. He's happy. How many people can say they have a happy, well-adjusted kid? Not many. So she's like, 'If it's not broke.'" 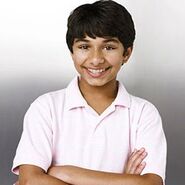 Add a photo to this gallery
[[Categ
Retrieved from "https://uglybetty.fandom.com/wiki/Justin_Suarez?oldid=10410"
Community content is available under CC-BY-SA unless otherwise noted.