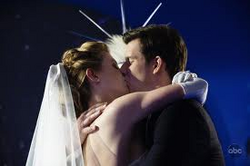 As the day begins, Suzuki St. Pierre reports on Calvin Hartley's involvement with Meade Publications, and the TV screen flashes over to Betty eating a donut...which Justin notices after he sees Betty with one at home. As she kisses Matt, who wishes her good luck on a possible promotion, Hilda stumbles onto a letter addressed to Elena.

vin has initiated a hiring freeze and that they will have to wait until someone leaves. Hours later at YETI, Jodi informs the students about their final project, in which Jodi explains that whoever comes up with the best assignment will get a major job offer for the three participants. Jodi pairs Betty, Marc and Matt together, but Matt's slacking off could jeopardize everything they've worked for. This becomes very noticeable when Matt shows up late for the assignment, and it's not sitting well with Marc as he tells Betty about his behavior as if Matt doesn't care about the project.

The three come up with an intergalactic/music project that will take place at the Planetarium, but it appears that Matt is not at all interested, since he forgot to book the place days in advance. Later that evening Marc surprises Betty and Matt with getting singer Adele for the project. Unfortunately, Matt's lack of involvement continues to irk Marc, forcing him to get Betty to drop him as their partner. When Matt hears this, he leaves the apartment. When Betty follows him, she learns from him that he wants to do something else, and that is pursuing a career as an artist.

The following day, Betty finally gets the Planetarium for the assignment. But when she gets there, she sees Victoria, who asks Betty for a favor, but with some strings attached: After she showed Betty a screen shot of Matt's "accomplishments," Victoria warned Betty that if Matt doesn't finish YETI, they can kiss their future as editors goodbye. Betty reluctantely goes along with it and later back at MODE she does convince Matt to finish the project.

During the shoot, all things go as planned...until Victoria shows up, prompting Matt to ask Betty if she gave in to her. This leads to Betty getting blamed by Matt for listening to his mother as he walks off the set and Marc blaming the two for losing Adele because of Betty and Matt's arguments.

For Daniel, he's surprised that Molly, after looking at the layout for the wedding issue, asked about whether Daniel will pop the question, and after talking to Claire, he does, making Molly very happy about their future. However, the wedding plans seems to make the very-excited Molly worried to the point that she calls it off after she is shown a picture of a nursery.

Things comes to a head for Daniel and Betty, who turns their setbacks into a combined plan, in which Betty turns the project into a wedding for Daniel and Molly, who finally say their "I Do"s at the Planetarium. As Daniel and Betty dance, Matt interrupts Betty to apologize, then introduces Adele, who Matt managed to convince to come back for the project, to Betty. The project pays off for Betty, Marc and Matt, who are anointed the YETI future editors by Jodi, who seems to have an eye for a nervous Marc.

After Hilda confronts Elena about the letter, in which Elena may be offered a job at a hospital in Chula Vista, California, Elena told her that she doesn't know if she will accept because of her feelings for Ignacio. This prompts Hilda to talk to Ignacio about this situation, resulting in Ignacio asked Elena to marry her and with the Suarez family blessing, Elena says yes. But this brief moment of excitement would be short lived when Ignacio gets a phone call for the hospital in California, so Ignacio encourages Elena to pursue the job in California by buying her a ticket, saying that if he's committed to her, he's committed to what's good for her. The two have their final kiss before they part ways.

As Calvin sits in at the meeting for the wedding issue, he feels that the Cherry 7UP ad presentation isn't good enough, so when he sees Claire walk in to prepare for her "Hot Flash" issue, Cal decides to make Claire part of the project. This prompts Claire and Wilhelmina to square off over their roles at Mode, with Wil making remarks about Claire's lack of inspiration and Claire firing back over Wil's snarkiness, especially in front of a crying model, leading to the two to talk to Cal. Claire acknowledges that Wilhelmina is right, bowing out of the catfight for the good of the magazine. As Wil leaves, Cal then asks Claire to stick around to talk. Hours later at the wedding, Wilhelmina got a shock from Claire, who told her that Cal made her the Senior VP at Meade Publications, which means that Wilhelmina will have to report to her archrival. Wilhelmina's response was not audible when she went into an exhibit, closed the door and screamed so loudly that the portions of the exhibit (glass-made planets) break into tiny pieces.

On the other hand, the happy ending for Daniel and Molly takes a tragic turn when Daniel discovers Molly lying on the bathroom floor, just as they were preparing for their planned honeymoon vacation.

Retrieved from "https://uglybetty.fandom.com/wiki/In_The_Stars?oldid=8534"
Community content is available under CC-BY-SA unless otherwise noted.