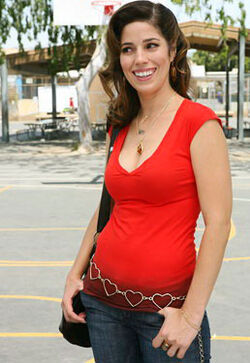 Hilda Talercio (née Suarez) is the daughter of Rosa and Ignacio Suarez, the older sister of Betty Suarez and the mother of Justin Suarez.

Hilda Suarez is Betty's vivacious and somewhat vain older sister. She became pregnant when she was about 17 years old, and gave birth to her son Justin, who she raised at home with her father and Betty, since Justin's father, Santos, was largely absent from his life.

Despite their clash of wills at times, Hilda is very protective of Betty and the rest of her family. With a fiery temper, she vents her rage at anyone who threatens her family, most notably next door neighbor Gina Gambarro. She also sometimes feels she's being left out of her family, because Justin looks up to Betty as more of a mother figure than Hilda while Ignacio tends to be more protective of Betty. This often leads Hilda to be jealous of her sister, though their relationship remains close.

Although Hilda respects Betty's job choice, she often thinks her sister is being taken advantage of at her job at MODE and feels it provides her with an unstable lifestyle. Nonetheless, Hilda has several times taken advantage of her connections and borrowed clothing and shoes from MODE.

Hilda was largely unsuccessful with romantic relationships. Mostly due to her problem with being serious, as she tends to be a bit promiscious. In the early season, she reconciled with her ex-boyfriend (and Justin's father) Santos during the first season, during which they eventually got engaged. However, in the first season finale, "East Side Story", Hilda was informed Santos had been shot in a convenience store robbery.

Early in the second season, it seemed as if Santos had survived the shooting. However, this was revealed to be a fantasy Hilda had created in her mind to avoid dealing with her devastation.

Hilda found a new love interest, "Coach" Tony Diaz who happened to be Justin's P.E. teacher. They have a rocky start when they first meet in the episode "Betty's Baby Bump", but eventually agree to go out with each other in The Kids Are Alright",.

In the season 2 finale, "Jump", Hilda learns Tony's ex-wife has returned. Thus, meaning that she's involved in an affair, but they eventually make up. Tony promised he's making his divorce finalized. However, when Tony's ex wife comes to see Hilda, Hilda decides to end the relationship. In the third season she begins to date politician Archie Rodriquez. Their relationship goes well until a boyfriend from her high school days, Bobby Talercio, shows up. Bobby admits that he still has feelings for Hilda when helping her with a problem. She cheats on Archie when she sleeps with Bobby. In the Christmas episode, Hilda and Betty both think they are pregnant due to a mix-up with the pregnancy tests but later it is revealed that Hilda is the one expecting a baby. Hilda tells Betty that Bobby is the baby's father. Archie, not knowing about either the affair or the pregnancy, breaks up with Hilda. In the episode, "The Passion of the Betty" Hilda tells Bobby she is pregnant, he freaks out and leaves. Soon after he comes to their house and tells her he is a good guy and that he wants to be involved in their child's life, as much as Hilda wants him to be. Bobby started "Hilda Week" because she was always take care of everyone else in her life, except for herself. It seems that Bobby and Hilda are back together because she kissed him outside the "Ace of Base" building. In "Blackout!", Hilda, Bobby, Betty, and Ignacio go to the doctor's to see a sonogram of the baby, but the doctor discovers there is no heartbeat. In the end of "Fire and Nice", Bobby proposes to Hilda after she gets to better know his parents and they figure they can get through anything together. Bobby and Hilda married in the series' penultimate episode, "The Past Presents the Future."

Since she became pregnant and dropped out of high school to raise Justin in his infant years Hilda was unsuccessful in finding a career path. According to Hilda's resume in the episode In or Out, her previous jobs included "Primary Skewer Girl" at "Zucchini on a Skewer" in New Haven, Connecticut. The resume also says she went to elementary school in New Haven, but graduated high school in Jackson Heights, New York.

At one point during season one, Hilda tried to recruit Betty to join her in a new venture, selling door-to-door products from "Herbalux", a health supplement company based in Poland. Later, she found herself out of a job after Herbalux was placed under investigation by the FDA and the company itself became the target of a lawsuit filed by a woman in New Jersey after she lost her hair using a hand créme days before her wedding.

Later, after Santos' death a devastated Hilda became housebound and spent most of her time with elderly ladies. Finally, she was convinced to follow her true passion and she became a beautician after graduating from cosmetology school. She would later start her own beauty salon, "The Sweet Hairafter" (later renamed "Hilda's Beautilities") thanks to Justin selling his Playbill collection.

Retrieved from "https://uglybetty.fandom.com/wiki/Hilda_Suarez?oldid=10471"
Community content is available under CC-BY-SA unless otherwise noted.