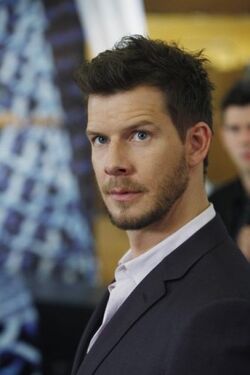 Daniel Meade is the son of Bradford Meade and his wife, Claire Meade. He has a sister, Alexis. Half-brother to Claire's son Tyler Meade-Hartley and was briefly the husband to Molly but she died of cancer at the end of the third season. Is close friends with his former assistant Betty Suarez, and they are of close emotional support to one another throughout the series. He is also the current Editor In Chief of MODE and a former sex addict. In the end of season 2 he loses his place as Editor In Chief and is replaced by Wilhelmina Slater . He also has a son, Daniel Meade Jr., who lived in France until his mother died. However its later discovered that Alexis (before she transitioned) had slept with his ex. girlfriend and soon discovered to be the real biological father of Daniel Meade Jr..

Daniel is the son of magazine publisher Bradford Meade. His father picked him to become editor-in-chief at MODE, the fashion magazine Bradford publishes (his mother Claire Meade is the true owner of the magazine), after the mysterious death of Daniel's predecessor, the well-respected Fey Sommers.

Sensing Daniel would need help because of his inexperience in the fashion industry, Bradford decides to hire a personal assistant to guide him. However, due to his son's habit of womanizing, he knew the assistant he chose should be one his son would never be attracted to - so he chose Betty Suarez. Bradford figured by having Betty as an assistant, MODE would continue to thrive. Additionally, he knew Daniel would never sleep with Betty because she had very little sex appeal, not to mention avoiding sexual harassment lawsuits.

At first, Daniel resented having Betty work for him, but he eventually reconsidered and realized how valuable an asset Betty would be to the company and to his heart. They eventually began trusting each other and soon became very close friends.

Daniel was also reminded by his father and Wilhelmina about his late brother Alex, who was the editor-in-chief of sister publication Hudson. Daniel hoped by being in charge of MODE, he could prove to them he could hold his own without living in the shadow of his late sibling. However, he was unaware Alexis was not only alive and had a sex change, but plotting to have Daniel removed from the job. When Alexis did show up and reveal herself to Daniel, he was not happy and explained to Alexis his family really cared about him, and blamed him for their mother's drinking problem.

When Alexis attempted to fire Daniel, he fired back with an injunction because the family buried "Alex" and therefore Alexis cannot fire Daniel or claim ownership of the company, thus leading to a sibling rivalry which prompted Betty to play mediator between the two. Daniel agreed to a truce with Alexis until the matter was settled. In addition, because their mother owns MODE he and Alexis had to share co-EIC duties, despite Daniel not trusting Alexis because he feels she'll try to top him.

It is strongly hinted through the series Daniel is not just a womanizer, but unfortunately his Lothario ways caught up with him, as it almost cost him his EIC duties after a model he slept with revealed she was only 16, her 'older sister' really being her mother. But thanks to Betty, who discovered her passport proving she was really 20, the scam was averted, as was Alexis' plan to take over his job. While Daniel may have been saved by Betty, she believes he was using his womanizing ways to cover for his family problems, and has an actual physical sexual addiction. Seeking the help of a psychologist who Betty said worked at a sister publication, Daniel took his advice and was handed a bottle of pills to help end his addiction, unaware he may have found a new one (drugs) to replace his old one (sex).

In the season 1 finale, Daniel overdosed on the drugs he used to control his sex addiction, and stumbled into Alexis' office on the verge of dropping dead, blubbering nonsensical things. Alexis decided to take him to the hospital, but on the way, the car crashed as the man she had hired to kill Bradford Meade had cut the brakes. In the last shot, Daniel is lying unconscious beside his sister in the totaled car, no ambulances in sight.

In the premiere of season 2, Daniel recovered from the car wreck, and was confined to a wheelchair while his sister was still in a coma 3 weeks later. Later on, he helped Betty "bury" Henry, and at the last minute threw his pills into the hole, saying he will get over his addictions. Alexis woke up from her coma and, when Daniel asked her Are you all right, Alexis? she replied, why are you calling me Alexis, it's Alex! Alexis had forgotten about her recent sex change. Daniel tried to cover for her by saying it was his fault, but when Alexis regained her memory and admitted it (the murder attempt) to him, Daniel agreed not to say anything to their father.

Daniel's rocky relationship with his family got worse when he learned Bradford, blaming him for losing key advertisers, had started repairing his bond with Alexis. Daniel also opposed his father's marriage to Wilhelmina. When he discovered her bodyguard coming out of her apartment he put two and two together, only to learn from Betty she knew about their affair four months earlier because she made a deal with Wilhelmina not to say anything in order to get Betty's father Ignacio back to the United States. Daniel fired her for betraying her trust, but as he was trying to tell his father about Wilhelmina's affair, Bradford had a heart attack at the wedding, dying several days later. After Ignacio explained why Betty had kept Wilhelmina's secret, Daniel regretted his decision and tried to talk Betty into coming back.

After Bradford's passing, Daniel and Alexis battled to succeed him as chairman/CEO of Meade Publishing, culminating in a paintball contest. Daniel lost to Alexis, who pretended to be hurt while they were playing.

Daniel briefly dated Wilhelmina's sister, Renee. That relationship came to an end when she tried to kill Betty out of jealousy and was put into an asylum.

Wilhelmina returned to Mode after she revealed her unborn child with Daniel's dead father. That made her an even bigger enemy than before, as she demoted Daniel from Editor-in-Chief, and again became Alexis' ally. He was reassigned to editor-in-chief of Player magazine, a magazine directed toward men, but thanks to Betty discovering letters of loyalty given to her on purpose by Marc as well as good ideas in Daniel's mock up of Mode, Daniel is reinstated as Mode's editor-in-chief after sales plunged under Wilhelmina's rein.

Daniel also seems to be the father of a little French boy, named Daniel Jr (affectionately known as DJ). He met the boy's mother, a French model, on a trip to Paris years ago. (Alexis was also present on the trip.) In a letter to Daniel Jr. from his mother, she tells him that Daniel is his father. However, results from a paternity test show Alexis Meade is the actual father. When the parents of Daniel Jr.'s mother wanted to take him back to France, Daniel tried to take him away but realized he couldn't do that and instead decided it was better to be "the cool uncle."

When Wilhelmina suggests hiring Connor Owens to be the new financial officer for Meade, Daniel is reluctant as he seems to hate the man. Eventually, Wilhelmina gets her way only for it to turn out Daniel and Connor were playing at disliking each other to trick her. However, Connor doesn't play favorites with Daniel either, doing whatever he feels best for the company. At a company retreat, Daniel meets Connor's fiancee Molly and the two strike an instant flirtation. This gets the attention of Wilhelmina who, wanting Connor for herself, seems to be planning to push the two together. After they share an almost kiss Daniel decides to confess his feelings. At the beginning she leaves the party upset but afterward she joins him and after telling him that she has just broken up with Connor, they kiss. Their relationship seems to be good until she tells him that she has cancer. Even if at the beginning it seems to be a worst turn they soon go back together.

Towards the end of season 3, he marries Molly. However, she collapses on their wedding night, and after begins developing fevers, indicating her time was coming to an end. At Molly's insistence, Daniel goes to accept an award on behalf of Meade, and he sees Molly through the crowd before quickly disappearing. He realizes she has died while he was giving his acceptance speech, and he comes back to his apartment just in time to see her body being carried out in a body bag. He calls Betty to help console him on the stoop of his apartment.

In the midst of Season 4 - Daniel Meade goes through drastic changes. He joins a group known as the Community of the Phoenix, which almost killed him. He lost all of his money to Connor, which he had to save his company by getting a hefty sum of money by Calvin Hartley which he is later bought out because the money that Connor Owners stole was found. He promotes Betty to Junior Features Editor in which she won by 'flipping a coin'. Her ex boyfriend Matt Hartley was her boss who soon quit. He fell for Amanda Tanen Sommers then he realised that it was okay for her to date Tyler. He quits Mode at the end of Season 4, and ends up in London, same as Betty. She jokes that she might be in need on an assistant. It is possible that romantic feelings between them might develop due to the feel of the conversation, but is not confirmed in this version. Leaving the audience to their imagination a bit. In the original telenovela, they end up together, and have a daughter who greatly resembles Betty as an infant.

Daniel Meade's letters and magazines are sent to his address at 6767 West End Ave., New York, but it is not specific whether this is his apartment or his workplace.

Retrieved from "https://uglybetty.fandom.com/wiki/Daniel_Meade?oldid=10371"
Community content is available under CC-BY-SA unless otherwise noted.