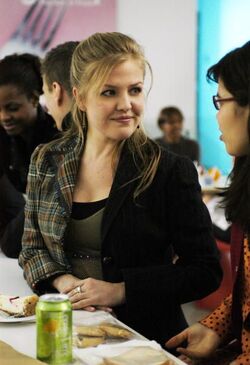 She is a Scottish immigrant, who worked as a seamstress in Mode but came to be a designer. She met Betty and the two quickly became instant best friends. She was revealed to have been married, to Stuart McKinney. She left him though mainly due to his constant drug abuse, later he returned and reconciled with her and revealed he had liver failure. Desperate for money, she agrees to be the surrogate mother for Wilhelmina. Then soon gives birth to William "Will" Stuart McKinney. However it becomes obvious that neither William nor Wilhemina are bonding. Its later revealed that Wilhelmina had lied about the paternity results and it was soon shown that Christina and Stuart were Will's real parents (since they had sex before she had become the surrogate). And soon left, thanks to Betty's help, with her son and Stuart to Scotland. She also eventually became a designer, which is her dream.

Christina emigrated to the United States from Scotland and is one of ten children; she is a seamstress who works at MODE magazine and calls her office "The Closet" because of the leftover fashion designs she has in her space, which she uses to whip up new outfits from time to time. Christina would later find out her workspace also served as a passageway to a secret hideaway for Bradford Meade and the late Fey Sommers.

Her knowledge of what goes on at her workplace inside and out comes in handy as she becomes fast friends and forms an alliance with new fellow co-worker Betty Suarez. And like Betty, she too has dreams, in which she aspires to be the next fashion designer.

She finally got her chance to show off her designs in the episode "I'm Coming Out", only to learn Wilhelmina Slater chose her show to set up for the return of Alexis Meade, who helped bring down Bradford Meade by framing him for the murder of Fey Sommers. Prior to the event a week earlier, Wilhelmina tricked Christina into turning in a package to the police in order to frame Bradford as an exchange for making Christina's designs famous.

After turning in the evidence, Wilhelmina has been using that as a crutch, so Christina can serve as a minion for Wilhelmina; even though Christina wants nothing to do with Wilhelmina's schemes. However, when Wilhelmina threatens to blame her for turning in the evidence by lying to Betty, Christina has no choice but to go along, even if it means she has to protect her friendship with Betty after she told her to never sell her soul to the devil when she talked Betty out of cashing a check Wilhelmina gave her to help her father in exchange for turning on Daniel. When Christina came clean to Betty in "Punch Out", the outcome would result in Betty ending her friendship with Christina because of her selling out to Wilhelmina. But the two would make up as Betty realized she needs her more than ever in "Petra-Gate", with Christina offering to help Betty seek out any info about Wilhelmina's schemes.

In the finale of Season 1, while intoxicated, she reveals she has had a husband named Stuart (an insurance agent), whom she left in Scotland. She tells Amanda ever since she left the country no one has bothered to look for her since. Afterwards in the second season she would be the one who would tell Betty's crush, Henry Grubstick, his girlfriend Charlie cheated on him and may have gotten pregnant by Betty's dentist, not Henry.

In "A League of Their Own", Christina was chatting on a dating site called bachelorcity.com, where her bio mentions she is 5'6", aged 32, has blonde hair, blue eyes and she enjoys dancing. However, a man revealed she was not single and he is her husband, Stuart. Christina was shocked and quickly shut off her computer.

Christina's husband did show up in A Nice Day for a Posh Wedding. Seemingly changed, Christina and Stuart slept together in Fey's love dungeon until Christina discovers an assuming drug needle in his rucksack. Stuart reveals he has liver failure (possibly cirrhosis from his years of alcoholism) and has no more than 6 months to live. His only hope is an experimental treatment that costs more than he can afford. Christina embraces her husband and swears she will come up with the money to save him. Unfortunately, she would later tell Marc and Henry the insurance she was hoping for to help Stuart would not cover for his medical expenses.

This would give Wilhelmina, who learned she has a "Hostile womb" and cannot bear children, the opportunity to make Christina a guinea pig by making her a surrogate to carry Bradford Meade's sperm as a way to control her loyalty, this after Marc suggested the idea to Wilhelmina. Christina would later agree to this deal in "Odor in the Court" with Betty acting as her confidant over Wilhelmina's objections. While staying at the Slater apartment, Christina would later find out about Wilhelmina's sister Renee's violent past and warned Betty about her, and then at a doctor's office learned about the sperm's donor, which resulted in Christina returning to her apartment to tell Stuart, who in turn sided with Wilhelmina after he called her. After seeking advice from Betty, Christina agreed to return to Wilhelmina, but told her that she would do it on the condition Wilhelmina gives the child the love and attention it deserves.

In the second episode of the third season, Christina confesses to Betty, she thinks Stuart is doing drugs again. She then sends some of Stuart's hair to a lab to be tested. The results come back positive, which devastates Christina as the entire reason she is having the Slater-Meade baby is for him. They get into a very loud and almost aggressive argument. Stuart then storms off when Christina theatens to call immigration on him. At the end of the episode as Christina is leaving MODE for the day she is pushed down the stairs by an unknown person and loses consciousness. It was later revealed Alexis was the one who pushed Christina down the stairs in a blind rage because the baby she is carrying represents Wilhelminia's opportunity to take over MODE magazine. Christina would also learn that the medical experiments Stuart was taking were not working and he has only six months to live.

In February 2009, Christina finally gave birth to Wilhelmina's "son", William Slater-Meade. But it would become obvious in the weeks afterward Christina would start bonding with the boy. This would later be confirmed by Wilhelmina, who discovered two days before she had Christina injected with the sperm, Christina and Stuart had sex. Christina later confronted Wilhelmina about William, and in turn tricked Christina into believing William was actually Wilhelmina's son after she showed her a letter which she fabricated the DNA results. Devastated, Christina would kidnap William and dragged Betty into helping her find proof, leading to Claire Meade's involvement in the ensuing drama. Thanks to Betty's intervention by doing the right thing for William, Wilhelmina admitted to the press Christina was William's natural birth mother. Now that William has brought them together as a family, Christina and Stuart decided to go back to Edinburgh with their son.

In the episdoe "London Calling," Christina came with Betty, Hilda, and Amanda for Hilda's bachelorette party. It is revealed that Chirstina is now starting to live her dream as a fashion designer, and just had a successful fashion show in London, earning her plenty of praises.

While Jensen was considered a primary cast member on the show, her presence was becoming less noticeable by the third season, since she remained in Los Angeles while "Ugly Betty" was setting up production in New York City, making it difficult for her to continue working on the show. On 14 January 2009, Jensen at first denied rumours she would be leaving the show at the end of its current series. However less than 2-months later, it was announced on 12 March 2009, Christina would leave the show at the end of the current season, after Jensen quit the show. However, producer Silvio Horta stated Jensen would still have a recurring stint in the fourth season.