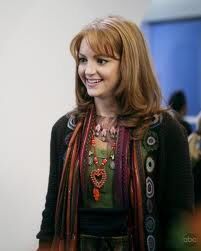 She was revealed to be Henry's on/off again girlfriend. And came to New York and unknowningly because of Betty's interference became enarmored with New York and decided to stay and continue her relationship with Henry. Although she's been shown to be friendly (often a bit overly that its annoying), a bit hyper, naive, and creative. She's been shown to have a mean streak, such as when she realizes that Henry and Betty have feelings for each other. She cruelly refuses to give him up to Betty and used the fact that she was pregnant to pressure Henry to be with her. Although she appeared to be faithful to him, it was revealed by Betty's dental nurse Diane, that she had been hanging around her and had been cheating on Henry with Betty's dentist Dr. Gabriel Farkass (much to Diane's personal annoyance finding her too nice). However it was revealed that Henry was indeed the father of her baby and gave birth to Nathan 'Nate' Grubstick.

Charlie (her full first name is Charlotte), is an arts and crafts designer from Tucson, Arizona who is very enthusiastic and wears outfits reflecting the southwestern culture of Arizona. She is also the on-again/off-again girlfriend of Henry, the accountant at Meade Publications, also the object of affection from Betty Suarez, who happens to work in the same building.

When Charlie shows up in New York City, it would prompt a shocking surprise from Henry; it appears during the holidays he went back to Arizona in the hopes of getting back with Charlie after dashing Betty's dreams of finally going after him Betty sees him kissing a model Betty later learns was just that and nothing else. He would later break Betty's heart after he tells her she has shown up to work things out after the incident.

When Betty first meet Charlie, they instantly become good friends. She finds her as friendly and creative, but at the same time naive and scared, since this is her first visit to the Big Apple...until Henry shows up and she rushes into his arms. Henry in turn believed Betty was cool in befriending Charlie and wanted her to show Charlie the city, of which Betty reluctantly agrees to. As Betty takes Charlie around the following evening, she loses Charlie in the subway after Betty is distracted by the voices in her head (thanks to Amanda's advice to seize her inner MODE girl and suggests she find Charlie’s weakness and exploit it!) When Betty finally comes to her senses, she tells Henry it was an accident but then admitted that she let it happen because she broke up with Walter so she can be with him. But as they stare at each other and prepare to kiss, Charlie runs up and tells Betty that she loves New York and insists it must have been fate that separated her and Betty at the subway station, prompting her to stay indefinitely. As a result of this, Betty decided as long as Charlie is around she sees no future in pursuing Henry and tells him they'll only be friends, even though the two still show signs of attraction despite Charlie's presence.

In the season one finale, after Charlie and Henry break up, Charlie appears at Betty's house to talk to Henry. She ends up telling Betty, and Henry, she is pregnant. This causes Henry to say goodbye to Betty and to go back to their hometown with Charlie. Betty later finds out Charlie had been cheating on Henry for two months with Dr. Farkas, Betty's old dentist. It is now unclear whether or not the baby is Henry's or Dr. Farkas', and already Henry has found out about this deception from Christina McKinney after Betty told her. Later, Henry is asked by Betty to tutor Justin, who is acting out since the death of his father and realization he is nothing like Santos. Henry walks in on Justin making out and drinking with a young girl (who resembles Gina Gambarro in both clothing style and overuse of make-up) and reacts badly. Betty sees an upset Henry outside her home where Henry confesses he found out a couple days ago that Charlie's baby is indeed his.

Charlie eventually returns to New York for the birth of her baby, making Betty and Henry struggle to enjoy their last few weeks together. Charlie becomes more and more anxious to keep Henry away from Betty, leading Hilda to come to Charlie's apartment and threaten her. Charlie gets worse and worse until Betty decides trying to befriend her would make things easier for her and Henry. However, when Betty attempts to throw a baby shower for Charlie at her own house, Charlie again spitefully acts rude and demanding, leading Betty to finally lash out at her. This is when Charlie suddenly goes into labor. Betty and Charlie realize she has to give birth at the Suarez house. She and Betty do reconcile and Henry arrives just in time for Charlie to give birth to a son, named Nathan "Nate".

Unfortunately, this relationship would not last afterwards, for it would be revealed Charlie and Henry would later no longer be a couple as Henry has moved on with a new girlfriend and is now traveling across South America, as Betty discovered from Henry's replacement at his former workplace. There was no indications at this point about what Charlie has been doing since this breakup. In addition its unknown if Nate is with her or with Henry. It can be assumed they have joint custody.

Retrieved from "https://uglybetty.fandom.com/wiki/Charlie?oldid=9136"
Community content is available under CC-BY-SA unless otherwise noted.