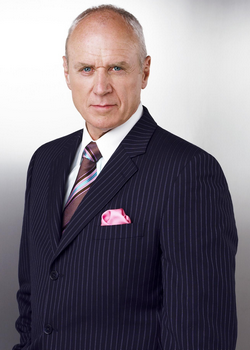 
Owner of Meade Publications
CEO and chairman of the board

Bradford is the president of Meade Publications, a conglomerate of multiple publications, of which MODE is the crown jewel. He also was responsible for making major changes at the magazine after the mysterious death of chief editor Fey Sommers, including handing over the day-to-day operations to the inexperienced Daniel. He was also responsible for getting Betty Suarez hired as Daniel's personal assistant due to Daniel having a history of bedding his past secretaries. Mr. Meade also put in a clause that Daniel is not authorized to terminate Betty. He believes that Daniel will not try to have sex with an ugly, homely girl and that Betty will actually help Daniel get some work done.

Bradford's decision to put Daniel in charge and to make Betty his assistant are reasons alone for Creative Director Wilhelmina Slater -- who wanted the editor-in-chief job -- to plot against them in an effort to manipulate Bradford into reconsidering her for the top job.

However, Bradford was also skeptical about Fey's death. He had tampered with the steering wheel in her car and she later died in a car accident. After noticing Fey's casket was closed at her funeral, he hired a private detective, Steve, to find out any information that could implicate him and whether she faked her death. Prior to her death, Bradford and Fey had an affair and later he broke into her apartment and retrieved a photo of them together. After the funeral, he burned the photo to hide it from Daniel and Bradford's wife Claire.

Bradford was showing signs of being more sinister after learning that Fey is still alive and that Steve was actually working for her (It was later discovered in "Sofia's Choice" that Steve was really working for Wilhelmina). In turn, he hired a henchman, Mr. Green, to "clean up messes" starting with Mr. Green burying Steve in Fey's empty tomb - though Steve survived. Bradford planned to step up his scheme to bring Fey out into the open by any means, dead or alive, even though he was unaware that his "late" son, Alex, was actually behind this scheme and was planning to frame him for Fey's murder, which happened during Fashion Week, when he was arrested after Alexis stuns him by revealing his sex-change in front of the world as he was about to hand over the reins to Daniel. He was actually innocent though, because it was revealed in the episode Brothers, that Claire killed her. When Claire visits him at Rikers Island and tells him that she will turn herself in, Bradford was not happy about this, since he was trying to protect her in more ways than one, but in the end she does and he was released immediately.

With that turn of events out of the way, it was expected that his damaged relationship with both Alexis and Daniel would resume, and with Alexis back in the picture still trying to reclaim a piece of the Meade empire, Bradford was going to make his distrust of her a priority, especially after going through with the sex-change operation even as he tried to mold his son into the "Golden Boy" that would carry on the tradition, which he was hoping to distill on Daniel before the arrest.

It was later revealed that Bradford's company only publishes MODE; Claire is the actual owner of the magazine and has the ability to pull the strings. She was able to do this as Bradford had put the magazine under her name to evade taxes.

In the episode Punch Out it was revealed that Bradford is turned on by women's feet (a fetish that Fey Sommers exploited to keep their relationship alive). Wilhelmina uses this information to her advantage and seduces Bradford (successfully), so she could "own" and control Meade Publications. She also succeeded in convincing Bradford to divorce Claire after Wilhelmina made Marc beat her up, and told Bradford the injuries were caused by someone Claire hired.

In the season finale, he gave Wilhelmina an engagement ring that he made himself, setting things up for a November wedding. Unbeknownst to Bradford, Claire had just escaped while en route to prison, hoping to stop him from marrying Wilhelmina. In the finale it was also revealed the brakes on Bradford's car have been cut by the hitman Alexis hired to kill her father; ironically, Alexis makes this discovery while driving the car in order to take Daniel to the hospital.

As the second season starts, Bradford is unaware (at first) that Wilhelmina is making sure that once they are married that she fully take over Meade Publications without his knowing and that Claire is trying to reach him so she can warn him and save their marriage (but Wilhelmina was roadblocking these attempts successfully), while speculation loomed over whether he had an illegitimate child with Fey...who happens to be Amanda Tanen, the magazine receptionist and ex-girlfriend of son Daniel (the results would comeback negative), and would take advantage of Alexis' amnesia by altering her previous life as Alex by trying to bond with her despite being skeptical of his motives by Daniel. The latter would cause major friction when Bradford started to favor Alexis over Daniel.

On the day of his wedding, Bradford collapses of a heart attack while at the altar with Wilhelmina, this after Daniel told him about Wilhelmina sleeping with her bodyguard. At the hospital Bradford would later come to his senses by admitting that he really did love Daniel, learned about Wilhelmina's deception, and finally reconciling with Claire before she was arrested. He later dies in the I.C.U. moments after telling Betty to watch over Daniel, since he knows that she is the one that can keep Daniel on the right path.

Unfortunately, Bradford's passing also opens up a new scheme for Wilhelmina. When she went to the morgue to see the body, she bribed the person who is about to do the preservation of Bradfrod's body into acquiring his sperm so she can use it for impregnation.

In "Giving Up The Ghost", Bradford returned as a manifestation of Betty's guilt for not being there for Daniel, guiding Betty in her actions throughout the episode to save MODE. At the end of the episode when the lack of magazine cover issue is resolved, Bradford leaves Betty realising that she will now be there for Daniel. Having taken back her job at the magazine, Bradford comfortably disappears into the white light, and presumably his soul is now at peace.

He also appeared in a video message for Alexis and Daniel in Bananas for Betty, recorded weeks before his death.

Betty Suarez
Assistant to Daniel Meade; He was responsible for getting Betty the job so she could keep Daniel from hiring attractive women just to sleep with. Her knowledge has helped Daniel succeed in their roles at MODE, which also pleased Bradford. And like his son, he seems to trust Betty a lot more, especially when he tells her to watch Daniel's financial responsibilities. She would be the last person who saw Bradford alive.
Fey Sommers
Former Editor-In-Chief; He had a 25-year affair with her and was under suspicion because he tampered with the steering on her car at the time of her death. He believed that she was still alive (after the announcement of her death), thus prompting him to resort to sinister measures to expose her hoax. Like Wilhelmina, it became apparent in the past that Fey was only using Bradford for control of MODE magazine. She became very angred when Claire gave Bradford an ultimatium between her and Fey, and Bradford chose his wife. Even so that she decided she'd drug Bradford to make him kill Claire, but it backfired when Claire was exposed and ended up killing her.
Wilhelmina Slater
Creative Editor at MODE; After being passed over for the role as the editor-in-chief, she has secretly sought revenge by teaming up with Alexis Meade to drive a wedge between him and Daniel, as well as using manipulation tatics to convince him that she is the right person for the job. She romanced him in an effort to get control of MODE away from his wife Claire, but may be aiming for the entire parent company so Claire won't pull the strings.
Daniel Meade
His son Editor-In-Chief at MODE; Despite handing the job to him, Daniel is not so sure that he can live up to the challenge, but has gained his trust even though the two had shown signs of a rift in their relationship, which was being fueled by Wilhelmina. They made peace before his passing.
Alexis Meade
His son-turned-daughter and Co-Editor-In-Chief at MODE; Before Alexis (then Alexander) had a sex change, Bradford did his best to try to persuade him to not become a woman. Alex faked his death in a skiing accident to secretly have a sex change and came out of hiding two years later. However, Bradford still did not accept Alexis and tried to have her fired. This failed due to Claire's ownership of MODE and her desire to see Daniel and Alexis work together. After Alexis turned down a $10 million offer to leave the company, Bradford took Wilhelmina's suggestion by enlisting Rodigo Veloso, the creative director at MODE Brasil, to romance her so he can get her out of the company and the Meade family for good, a plot that later failed. After being injured in a car crash (that was intended for Bradford), Alexis went into a coma, only to wake up thinking she is Alex, thus giving Bradford a scheme to change family history. He would later accept her as family again.
Claire Meade
Bradford's wife (now widow); Has been in and out of rehab due to her drinking problem, which was brought on by Bradford's affair with Fey. Although they are estranged, the two are still married. Even as she faces jail time, Bradford insists that he will stay married to her, but thanks to Wilhelmina's tactics, he decided to divorce her. He would later reconcile with her for last time before her rearrest.
Sofia Reyes
Author and Editor-In-Chief of sister publication MYW; Bradford hired her to help launch a new magazine and was the one who gave her the newly created position.
Amanda Tanen
Receptionist at MODE; because of his affair with Fey Sommers, Amanda suspected that Bradford may be her biological father, but when the results came back it turned out to be negative.

Retrieved from "https://uglybetty.fandom.com/wiki/Bradford_Meade?oldid=10190"
Community content is available under CC-BY-SA unless otherwise noted.