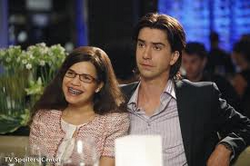 The story begins with Betty helping out at Hilda's Beautilities, where she helps Hilda try to get money so Justin can attend private school. Betty mentions to the family that she has just been promoted to associate features editor, but at work, Betty is discovering how cruel Matt is treating her when she gets a bean bag for a seat at a meeting. Matt is also upset with Betty over the botched photo shoot and now her job is on the line. However, thanks to a family friend named Sammy, Betty could get the b

reak she might need when she learns of a Dolce & Gabbana designer, Evan York, leaving the company to join Gucci.

Marc tells Amanda about trying to get back at Betty by taking her job, a plot supported by Wilhelmina. So when he learns of Betty's job being in jeopardy, he gets wind of the interview that Hilda pitched to Betty via a three-way phone call. Marc tries to sabotage it by any means necessary, he finds himself trying to be friendly to Betty while pulling out all the stops to find out how to steal the interview, even after getting a birthday cake from her (which he doesn't like). Later that evening, Marc discovers Betty avoiding Matt, so he finds her weakness. That's when Marc comes up with the perfect plan: pair Amanda with Matt for a dinner date at the same restaurant that Betty was going to that evening. To the two, they think it's just that, a dinner date, even as Marc uses that ruse so Betty can be jealous of Matt while Amanda can get Marc the scoop from Betty, without the three finding out.

At the restaurant, the dinner between Betty and Evan goes off very well, especially with Hilda and Ignacio as waitress and chef. But the evening becomes more interesting when Matt and Amanda show up. Betty and Matt try to keep their distance even as Hilda interferes. Betty is not happy about what Hilda is doing even after lying to Matt about Betty dating another guy. Betty at the same time suspects that Matt and Amanda are also dating, leading the two to become very suspicious of other each and try to one up each other. This reaches boiling point when Evan ends the dinner, followed by Matt arguing with Betty, and Amanda, believing that Matt wanted to date her so she can make Betty jealous, walks out after telling him that she was not interested. After Matt and Betty are brought into the kitchen by Hilda to talk, Betty tells Matt that she tried to get him a interview, but thanks to Matt showing up, that ended all hopes for landing the scoop she then tell Matt that he is a spoiled brat and he is only being a jerk to her because for once in his life he didnt get what he wanted when their relationship failed. Matt in turn admitted that he was wrong about Betty, that he was a little jealous of her happiness and that he might have taken it too far and that he was just being a brat.

Matt later turns up at Amanda's place to apologize and she accepts. Betty also comes by to apologize, but when she learns that it was Marc who set the reservation, both ladies find themselves in shock after discovering that Marc used Amanda to get the scoop for him. The next day Betty confronts Marc and tells him that his attempts to take her job away won't work as long as she is still there and that she refuses to be bullied around by him, while Amanda slaps Marc for lying to her about his scheme.(She is also hurt because she thought Matt actually liked her.) As Betty walks by the meeting room, she sees Matt put a chair in place of the bean bag.

Daniel is still healing from the punch he gave Matt (as evidenced by the bandaged bruise that Matt had on his face) when Betty and Claire remind him to go his bereavement meeting. At the meeting, Betty gets proof that Daniel is at the place after he hands over his phone to a woman named Natalie, who then begins to strike up a conversation, which in turn leads to a evening together. As the two visit a swimming pool, Natalie tries to get Daniel to open up about Molly as a way to cap off a perfect evening.

Finally, Wilhelmina gets a surprise phone call from her bounty hunter: He has found Connor! She flies to Bermuda to confront him. While there, she waits for him at the hotel he was staying at. Thinking that he might have left the country again to avoid her, Wilhelmina discovers Connor right in front of her. Connor is aware of Wilhelmina's suspicions and then kisses her, believing that she still has feelings for the fugitive embezzler. Unfortunately, Wilhelmina comes home empty-handed and consoles Marc over their latest defeats.

Retrieved from "https://uglybetty.fandom.com/wiki/Blue_on_Blue?oldid=8597"
Community content is available under CC-BY-SA unless otherwise noted.