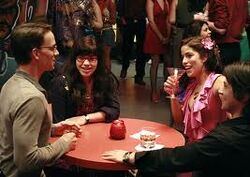 The story begins with a romantic dinner between Betty and Henry, only to be interrupted by Charlie. Frustrated by Charlie's interference, Betty tells Henry that the only way to solve this problem is be around Charlie, so Betty switches gears with rival Charlie and tries to befriend her by first accompanying Charlie to her yoga class. However efforts to befriend her during the yoga class failed, resulting the yoga instructor throwing them out of the class. Then Betty decides to

throw a baby shower. Charlie does everything in her power to make Betty miserable by complaining about all the littlest things. Despite efforts by Henry to start a long distance romance, Claire tries to put a little sense into Betty by pinching her elbow and to let Betty know that she will have to give up her future with Henry eventually. At the baby shower, Betty finally confronts Charlie, only to have Charlie tell Betty that her water broke. They soon share a sweet moment of reconciliation before she has her baby. Henry then arrives and witnesses the birth of his son, but as the rest of Betty's family look on, Betty soon realizes that she can't keep a long distance relationship with Henry while he has a child.

Meanwhile, Hilda confronts Justin's PE teacher when she learns Justin is flunking gym. Coach Diaz expresses his belief that everyone should benefit from some exercise so he decides to fail Justin for constantly skipping class. Justin is not happy about Hilda confronting Coach Diaz, so Hilda invites him to the salon for a haircut. Hilda admits to Betty that she had a crush on Coach Diaz, but things turn worse when Hilda got distracted and nick the coach in the ear during his haircut visit. After that incident she goes down to the school and talks to the coach to apologize. He then tells Hilda that he'll pass Justin if Justin help out with the choreography for the cheerleading squad. Afterwards, Hilda asked for his first name, to which he says its Tony. It looks like Hilda has all of a sudden fallen for him.

Daniel unravels after his break-up with Renee and has affected his work at MODE and it is not sitting well with Claire, Alexis or Betty. So he reluctantly sees a shrink who he would later have sex with. After a night of sexual escapades that resulted in his wallet getting stolen, Daniel shows up at the Suarezes asking for money. After a walk with Betty's father Ignacio, Daniel learns that he should find himself something that he can be passionate about. Later he returns to the office to help Claire and Alexis with the upcoming issue.

Christina finally learns who fathered the baby she's carrying for Wilhelmina during a medical checkup. She runs away to her apartment, where her husband Stuart was staying, after she sees the name of the father (Bradford Meade) on the sonogram at the doctor's office. While she was there, Stuart tells Christina that she has Wilhelmina in a weak spot and should bargain her for the baby. When Stuart calls Wilhelmina over, Christina runs away (to Betty's place for advice) saying that there is a baby to think about, but eventually returns to Wilhelmina saying that she will have the baby if Wilhelmina promises to care and love the baby and give it everything it deserves.

Soon, Wilhelmina, who had been using this baby ploy as part of her "comeback" to MODE via media exposure, takes that advice from Christina to heart, then visits the Meades and reveals that she is having Bradford's baby by showing the sonogram over the MODE logo and that she will give it exactly what it deserves: A third of the Meade empire.[1]

Retrieved from "https://uglybetty.fandom.com/wiki/Betty%27s_Baby_Bump?oldid=10017"
Community content is available under CC-BY-SA unless otherwise noted.