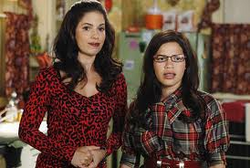 The story begins with the family getting ready for breakfast with Ignacio making potato latkes. Ignacio announces that he has invited his new girlfriend, Jean, over for a multi-culti Christmas–Hanukkah dinner. As Betty leaves, Bobby stops by, which upsets Hilda, even though Bobby was there to pick up Justin, while Ignacio holds up a Cabbage Patch Doll to show Bobby, who believes took a display of the baby Jesus 14 years earlier, which Bobby denied. After she leaves, Betty starts to feel queasy as does Hilda later on while she and Archie were visitingMacy's to drop a letter to support the Make-A-Wish Foundation.

On Fashion TV, Suzuki reports on Wilhelmina in jumpsuits and Connor in jail. Claire and Daniel discuss hiring a new creative director despite the disagreements over Calvin running the company and Daniel being blamed for hiring Connor, while Marc is suffering from "Stockholm Syndrome", due to Wilhelmina no longer with the company. Cal later stops by to introduce Daniel their new creative director, a clueless Hollywood mogul named Denise Ludwig, whom Daniel is not happy about and when he tries to reason with Cal as to why he was not consulted, Cal reminded him about who was running the company and it wasn't Daniel.

As Daniel prays that Connor rots in prison, it looks like Connor and Wilhelmina are getting hot and heavy behind bars, as Wilhelmina have been secretly been making surprise visits daily for the past two weeks, as they hope that as soon as they get the money back Wilhelmina will be back at Mode. When Wilhelmina returns to reclaim her job, Daniel tells her that it was filled. Wilhelmina then leaves, but prior to her visit, Marc suggests to Daniel, who wanted to get even with Cal by recovering the money, by enlisting Wilhelmina in an effort to get the money back. Hours later back at prison, Wilhelmina and Connor is interrupted by a phone call from Daniel. Connor goes to answer Daniel on the other end but Connor refuses to spill the beans and blames him for taking Molly and making Wilhelmina choose between him and the company, saying that he knows where the money is. However this was all planned, as Wilhelmina and Connor set up a scheme in an effort to get the Hartleys out of the company. This also sets up a scheme for Daniel to get the company back in family control, as Marc suggests to Daniel that Wilhelmina might be useful in retrieving the money from Connor. As they went to Wilhelmina's place, the two agree to get the money back, on the condition that Wilhelmina gets a 50% stake in Meade Publications and non-veto power and that Daniel does not consult Claire. The two agree.

In between the meelee, Marc begins to reminesce about Wilhelmina with Amanda, as they looked at Wilhelmina's empty office and sees her empty chair, which he used to inject Botox into his former boss. Hours later, a deliveryman arrives to give Marc the Botox chair as a gift.

Amanda later reaches Claire to tell her that a plane is ready for her flight to Rapid City, South Dakota to see her son Tyler. In Rapid City, Claire arrives at a bar and sees a bartender, who happens to be Tyler, after she asks him for a beer as a way to get to know more about him. As Tyler talks about his life, Claire listens to him, seeing that he has done well for himself and realizes that he has turned out pretty well. Claire then thanks Tyler for having a great conversation and leaves him a 2,000-dollar tip. As Claire leaves, she informs Amanda and tells her that she doesn't want Tyler to know anything about her. However, as Tyler went to pick up his tip, he is stunned by the large cash that was left for him and sees an envelope that has Claire's name and address on it.

As they avoid Amanda, who seem to have jumped on the jumpsuit trend thanks to Wili, Betty and Matt talk about the get-together at the Suarezes, then comment on Betty's glow as she visualizes a future with Matt as Mrs. Suarez-Hartley. During the entire day, Betty still feels queasy and as she arrives to the bus stop, a waiting passenger notices Betty and gives her a seat because he thought that Betty looked like she was expecting and as the flashbacks come into the picture, her vision of her future changed completely as she sees a mirror image of herself as a pregnant woman. At the drug store, Betty asks for the Be-Shure pregnancy test kit from a pharmacist named Jean, without mentioning the name. Unfortunately, Hilda also shows up asking Jean for the same kit, but the siblings don't see each other even though the two do see Ignacio shopping and try their best to avoid him like the plague.

Back at home Betty and Hilda arrive to help Ignacio, while at the same time they separately head to the bathroom to pee so they can see if they are expecting. During the ensuing chaos, both try to keep each other and Ignacio from finding out as they fight for bathroom time. When Ignacio heads upstairs to ask for a band-aid, the sisters panicked as they were hiding something, and after he left the two separately discover a positive on their sticks thanks to a mix-up with their kits and both believed that they might be pregnant. But just as the two try to keep quiet about their double pregnancy, Ignacio welcomes a surprise guest - his Jewish girlfriend Jean, the pharmacist from the drugstore that gave the women the pregnancy test, but doesn't recognize either of them. And to make matter worse, Archie and Matt also arrives, as does Bobby, who returns the baby Jesus and admits to Ignacio that he stole it.

During the entire evening as Jean talked about her Jewish family members and being welcomed into a Christian family setting, the sisters try to keep their cool about the results and as they went back to the bathroom they saw the two sticks, but one turned up positive and the other negative. Betty believes that Hilda might be the one who is carrying but the two are not so sure and as Matt walks in on the two he sees Betty with the stick and is lead to believe that Betty is the one with child. Betty tells Matt that she is not ready but Matt stuns Betty by saying he is ready. That's when the two decide to retest to be sure, so Matt heads to the store. Later that evening, everyone gathers to see the lighting of the Nativity on the lawn. Ignacio invites everyone, including Bobby, back in the house, and when Jean prepares to light the menorah the chaos continued until a box of Be-Shure fell onto the floor, as does Jean's menorah. Everyone sees this as Betty picks it up and Matt follows her to the bathroom.

In the bathroom, Betty and Matt waited for a few minutes, then a negative sign appeared, as Betty breathed a sign of relief that she is not the one who is pregnant, even though Matt was somewhat disappointed. Ignacio was also relieved as well regardless of the outcome and they returned downstairs to finish the celebration. Hours later after the celebration finished, a devastated Hilda tells Betty that she is afraid to tell Archie about the pregnancy and that he isn't the father, now that she knows that Bobby is. Betty thinks its time for Hilda to come clean to Archie, when Archie comes by and see Hilda. However, its Archie who decided that it was better to end the relationship, but because he felt that there was someone out there who deserves Hilda and he wasn't the one for her. After he leaves, Hilda sees Bobby, who wanted to tell her that wouldn't come by the place anymore, but Hilda tells him he can come over anytime. She didn't tell Bobby about him becoming a father yet.

As the evening finished, Ignacio was pleased that Jean liked the get-together and was looking forward to a having an Easter/Passover dinner down the road, while outside Betty and Matt talked about visualizing their future together if they ever decide to ever have a family, then they kiss.

Retrieved from "https://uglybetty.fandom.com/wiki/Be-Shure?oldid=8603"
Community content is available under CC-BY-SA unless otherwise noted.