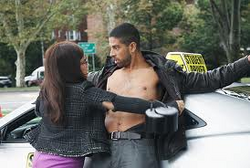 Its Saturday morning and during breakfast Betty shows off her new tattoo to Ignacio and Hilda as she talks about enjoying the single life. When Justin breaks the news that he is going to assist the cheerleaders at the homecoming prom and he needs help, the family blows up

because Ignacio's experience when he refused to let Hilda go to her prom when she was pregnant have come back (It turned out that Hilda was named homecoming queen the year she was pregnant). While they talk about Justin after they left the house, they run into an old friend named Bobby Talercio, whom Hilda once had feelings for and Betty had a crush on. Bobby is the school driver's education teacher, which happens to be his second job (he also works at an auto dealership).

At the school, Marc helps Justin out with the uniforms for the cheerleaders, when a couple of guys come over to make fun of him. Marc sees him get humiliated and tells Justin that its time to try something different by helping out the "mean girls," with their routines, starting with Ava the head cheerleader. As they visit the house, they show off a routine they want to show to the cheerleaders at the homecoming, for which Justin tells the family that he's been invited to be a part of.

At work, Betty and Daniel talk about The Order of the Phoenix, who Daniel believes is helping him in more ways than one, especially now that he is drinking their bottled water, wearing beads and going on a diet with Natalie. Betty and Claire become curious about his behavior. As Daniel runs into Amanda at the reception desk on a Saturday, Daniel convinces Amanda to go to the seminar as a way to change her life. Amanda, who now sees Daniel as somewhat of a friend, takes him up on the offer. At the get-together, Amanda starts to question the groups' motives to Daniel after Natalie, who after secretly talking to Bennett when Daniel mentions recruiting people like Amanda but they see her as a problem, lashes out at Amanda because she doesn't have the "energy". Amanda tells Daniel that its not too late to change his mind, but Daniel tells Amanda to go. When Bennett comes over to talk to him, he asks him that its time to go to the next phase, which is "Level 5," in which Daniel will be able to communicate with his late wife Molly. A skeptical Daniel thinks about it. During a tea drinking, Bennett pours a cup to give to Natalie and Daniel. After Natalie takes a sip and coughs saying it tastes bitter, Bennett squeezes a couple of lemon to make it taste better and they watch Daniel drink the tea.

As Matt runs into Betty, he gives her an assignment but she is not pleased that he gave it to Megan, so Betty tells Matt that if he wants an exciting feature, she is going to get him one. After she tells Daniel that she wants to be fearless, she decides to go up to Bobby later that afternoon to ask him about whether he would go out with her, but as we see fantasy sequences about Betty's true intentions, Betty lies to him, saying that she wants a driving lesson (even though Betty already knows how to drive). When Betty tells her family about hanging out with Bobby, Hilda and Ignacio are not happy about this for different reasons (his "Bad Boy" persona, for one), but Betty says that she's only doing it for the article. During her "Driving Lesson," Betty tries her best to attempt at the stick shift in front of Bobby. As a jaywalker runs in front of the 2010 Chevrolet Camaro she was driving, Bobby jumped out of the vehicle and takes the guy, then presses him in front of the window to make him apologize to Betty. After he gets back into the car, Betty asks him about if he was available and wants to join him for drinks at his uncle's bar. However as she returned home, Betty was shocked to learn that Hilda and Archie just set her up with a guy named Larry, who happens to be Archie's bookeeper. But Betty finds him boring and after dinner, she makes up an excuse to go to bed so she can sneak out to see Bobby, but hours later she is caught by Hilda after she is brought home by Bobby. Betty agrees to make it up to Hilda by escorting Larry to the homecoming.

The following day, Betty is once again trying to learn stick shift from Bobby, and she now has the hang of it. When Betty sees Hilda, Archie, and Larry waiting for her at the house, she tells Bobby, who thinks she needs to decide for herself what she wants to do. When he asked her to join him at a fast food joint, Betty said yes and floored the pedal. At the joint, Betty kept having fantasies about Bobby, but all Bobby would talk about was Hilda, even after Betty told him that Hilda was already seeing someone. At the homecoming, Betty shows up to the school to learn that Larry decided not to come from Ignacio. As Betty walked in, she runs into Bobby and has a conversation. As Betty admitted to him about having a crush on him, Bobby, flattered about Betty's admission, knew all along about being Betty's crush, but admitted to Betty about his true feelings for Hilda. Betty then gave Bobby a kiss and he walked away. Hilda sees this and as Betty catches up with her, she tells her sister that Bobby still has feelings for her.

Marc arrives to see this tension between the Suarez sisters, only to be interrupted by Ava, who came up to Betty and Marc to warn them that something is about to happen to Justin at the auditorium. As they get there, they tell Hilda, Ignaico and Justin to leave, when they announce the winner of the homecoming queen...Justin! Although Hilda felt embarrassed, Justin decides to go up to the podium and accept the award, then told the crowd that the person who deserves it the most was his mother, so he hands over the tiara and roses to Hilda. As everyone hugs, the crowd applauds Justin. As they went home that night, Hilda told Justin about what he did and didn't care what anyone thought about him. But Justin tells his family and Marc that he's actually straight and was pretending to act gay, saying that his flamboyant behavior was all a joke.

Later that night at bed, Betty and Hilda made up over what happened with Bobby, with Hilda admitting that even though she is dating Archie, she may still have feelings for Bobby.

As Wilhelmina gets off the phone with the detective, she becomes distressed with the fact that she could face jail time, so she tells Marc to make phone call to look for a model, for which Wilhelmina would offer her services. Unfortunately, it looks like she just landed a job...with "Hot Flash!" Claire gives the ground rules about this job. Later at the apartment, Nico frets about Wilhelmina's future when she mentions the only other option, Connor. Wilhelmina believes that Connor will find her and Nico, believing her, tells her mother that if she is going to do it for her, then do it for herself [Wilhelmina]. Hours later, Wilhelmina tells Claire that she is quitting as co-editor-in-chief. During the press conference, Wilhelmina made her announcement that her photo shoot in the Bahamas will be her last. The following day, Claire gets word from a detective about Connor Owens and their failed attempts to track the stolen money. When Wilhelmina walks in and overhears this, Claire tells her that Connor was found dead in Panama. This turn of events devastates Wilhelmina and she breaks down in tears.

Retrieved from "https://uglybetty.fandom.com/wiki/Backseat_Betty?oldid=8600"
Community content is available under CC-BY-SA unless otherwise noted.