Back in her Place 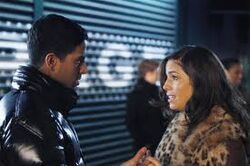 The story began with Betty pleading with her landlord, Mr. Z, after she knocks on his door and he asks for the rent. So he gives in, and, in a series of flashbacks, she starts explaining, complete with a broken left leg, peeling dry skin and overpuffed hair...

...Beginning with "Two Days Ago", when Betty tells Marc about writing a story about stillettoes, but finds it too light, saying that she wants to write something that inspires people other than writing about shoes. At

a cafe, and after overhearing a couple talking, Betty and Matt talk about their future together, when all of a sudden she observes different people wearing shoes. This gives Betty a idea to do a story called "Walk a Mile In Her Shoes." But Wilhelmina (who wanted Betty to write the story that she gave her) and everyone else in the meeting room was not cool to her idea, and gets her keys taken away.

As Marc talked to Daniel, Wilhelmina later walks in, saying that she wants Marc back. So the two agree to share him. However, it turns out that Marc is starting to screw around with Daniel's work schedule by rescheduling his appointments and altering his daily routines. This has Daniel to believe that Marc is trying to sabotage him so he can go back to Wilhelmina, even after Daniel told Wili that Marc now works for him. However Betty and Amanda thinks Daniel is not giving Marc enough credit and might be doing him a favor. Hours later on at the federal pen, Wilhelmina and Connor kissed, only to have Connor tell her that as much as he loved her, Connor is not so sure if he wants Wilhelmina in his life. But Wilhelmina isn't giving up easily, so she surprises Connor by proposing to him, and he accepts reluctantly.

As Betty talks to Hilda about what has happened at work when she starts to believe that Wilhelmina is giving her a hard time, Hilda watches Bobby spill spaghetti on the floor and is starting to get moody around him. This would prompt Bobby to tone down Hilda by pampering her now that she is expecting, so later on at her beauty shop he tells Hilda that he will put her on a what he calls a "Hilda Week", in which they get a chance to spend sometime together. Hilda accepts, as witnessed by a customer.

Back at work, Betty begs with Wilhelmina to give her another chance, so Wilhelmina gives in, but in what can be called "torture", she gives Betty a pair of high heels and wants her to wear them for a mile. Unfortunately, Betty is not feeling comfortable wearing them while walking the streets of New York City, and she bumps into Daniel along the way before she slips and hurts her leg. Betty returns the shoes to Wilhelmina while on crutches and tells her that she has submitted the story to her. Before Betty leaves, Wilhelmina gives her a lotion (that caused Betty's skin to break out) to use as her next story piece.

During dinner, Betty complains about Wilhelmina to Hilda, Matt and Justin, thus prompting the trio to convince Betty to start a blog. The next day ("Yesterday") Betty stops by Amanda's desk to ask her about using the apartment, but Amanda tells Betty that she and Marc moved out, which Betty just learned at the last minute because Amanda (in flashbacks) wasn't paying any attention to who she was talking to. Betty asked Marc about why she wasn't informed about this, but he stops by to give her another product (the shampoo that destroyed her hair) to do a piece on. At the apartment, Betty and Matt prepare to set up the blog and gets in a series of interviews from ordinary people, including a woman who talked about her experiences in helping people in Botswana. Hours later, after she gets off the phone with Matt and launching her blog, Betty gets a knock on the door from her landlord... to ask her about what happened to the two months back rent.

During a evening out together, Hilda and Bobby stop by to see if the local nightclub was open, as he wanted to show Hilda a concert featuringAce of Base, which happens to be their favorite group. However, the club was closed and he cuts a finger. Hilda then tells Bobby that the group was playing the next day after Bobby thought it was this evening.

The next day ("Today"), Betty confronts Amanda over not paying the rent, and makes it clear to Amanda that she must pay by blocking her from getting out of this excuse by using her crutches with force. A panicked Amanda gets the message. Moments later, Matt stops by tell her that after being moved by the Botswana story that he has decided to sign up for a six month tour to help people in Africa, stunning Betty.

During the afternoon, Bobby takes Hilda back to the club to see Ace of Base, when all of sudden Justin calls his mother, as he is home with the flu. Concerned over Justin's sickness, Hilda tells Bobby to enjoy the concert on his own and races back home.

Meanwhile, back at the prison, Wilhelmina and Marc show up to see her get hitched to Connor. However, moments after trying to bribe a guard, the guard tells Wilhelmina that Connor was transferred to another prison. Wilhelmina goes hysterical now that she realizes that he initiated the ploy to get her out of his life, as we learned that he bribed the guard earlier on before Wilhelmina's visit. All that Connor left was a note, which content would be revealed at the end of the episode, saying: "Willie, I did this for you. I love you to much. - Connor"

Over at Casa Suarez, Betty told Hilda, who was tending to a sick Justin, about Matt's decision to go to Africa and how to stand up to Wilhelmina. When Hilda came back to the living room, Bobby was there to give Justin a remedy for his cold, and told Hilda that he wants to make sure that he'll do whatever it takes to make her feel good. They later hear Betty screaming after she saw her hair...

...So back at MODE, Betty finally walks up to Wilhelmina to complain about being tortured, only to see Wilhelmina stare at her window and tell Betty about her feelings for Connor. After a brief chat, Betty leaves Wilhelmina alone. Betty later tells Matt that its best that they move on, so she tells him that he should go to Africa, and share a final kiss before they walked away.

Daniel finally confronts Marc about sabotaging him, but it turns out that Marc was actually helping him because he was attracting more unwanted attention in the press with his appearance and schedule, prompting Marc to intervene so that Daniel would not end up being tabloid fodder and added that he may want to listen to him for advice.

Finally, back at Betty's apartment, Amanda shows up with rent money (she sold her hair extensions), even though she was a little short but promised to make it up. Amanda told Betty the reason for moving out was to get over Matt and that being in Betty old apartment would make matters difficult, so she told Betty to take her apartment back. Betty then ran into the landlord and told him that she will do whatever it takes to pay off the rent. But Mr. Z says that he'll have Amanda pay for the rent and then asked Betty about her story that she wants to submit, which he'll accept as part of her rent, and takes him up on that offer.

Retrieved from "https://uglybetty.fandom.com/wiki/Back_in_her_Place?oldid=8605"
Community content is available under CC-BY-SA unless otherwise noted.